A weekly journalist feigned falling 70 feet down a limestone gorge in order to help a mountain rescue crew.

Craven Herald chief reporter Lesley Tate took on the role of practice casualty for Upper Wharfedale Fell Rescue as part of a training exercise being undertaken by the team.

In her voluntary post, Lesley was instructed to feign experiencing “the worst pain possible” after in imaginary fall from the top of Troller’s Gill, near Skyreholme, in the Yorkshire Dales.

Her experience provided a feature for the Herald, in which she outlined how she was “rescued” from her predicament. 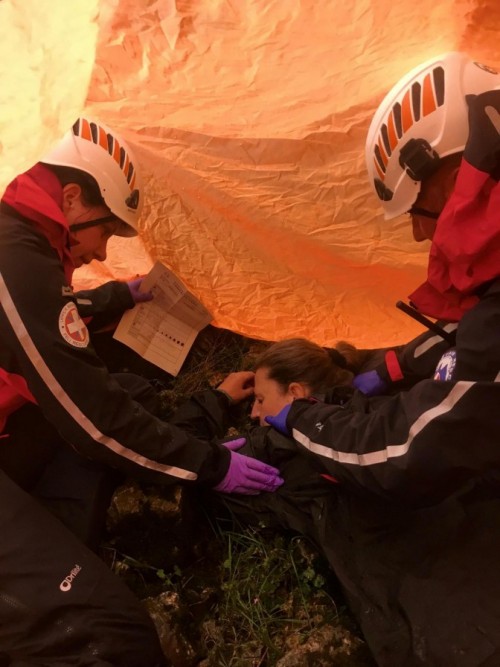 Lesley during the ‘rescue’

Wrote Lesley: “I was covered with a tent, mercifully out of the rain, examined, constantly spoken to , and my breathing and pulse regularly checked. I was also given gas and air – a pain reliever also used in child birth – weirdly, although the machine was not actually switched on, I thought it was, and instantly became very relaxed. Interestingly, although I had not been lying on the stone for long, I had become very cold, what with all the rain, and had started to shiver uncontrollably, it made me think how quickly hyperthermia must kick in.

“I was then gently lifted onto a specialist Bell stretcher by several pairs of hands, turned over and secured into a vacuum mattress. I was asked if I wanted my hands inside or out – good for someone like me who is slightly claustrophobic – and whether I had anything in my pockets – this, I learned later was to prevent items like keys getting painfully stuck in legs.

“Once the casualty is secured in the mattress, the air is taken out, leaving them extremely secure, and warm.”

Once out of the gorge the team reached an accessible spot from which Lesley would have been taken to hospital via air ambulance if she was a genuine casualty.

She added: “My taking part as a practice casualty was all part of a peer review weekend, which on the Saturday had involved a round the table exercise at the Grassington headquarters and on the Sunday the practice rescue.

“What of course could not be planned were the two actual call outs during the day. One came in just after the team had arrived to rescue me in the ravine, and which had threatened to put a stop to the whole exercise.

“Fortunately, a second team was dispatched to assist the mountain biker who had fallen at the top of Shortbank Road in Skipton and who had broken an ankle.

“The second call, to assist a woman at Buckden Pike, came shortly after we arrived back at headquarters. I had just been given a mug of tea and was talking to Tim Cain, of Swaledale Mountain Rescue Team, and national peer review leader, when the call came in. Minutes later, and most of the team had gone, off to rescue someone else.”