A weekly newspaper has foiled a bid to keep secret the area where a police officer charged with assault lives.

The Barnsley Chronicle has revealed PC Liam Stewart, who is charged with assaulting a teenage football fan, is from Hoyland, near Barnsley, after it successfully challenged a reporting restriction at Leeds Crown Court, pictured.

At a hearing in December, the Chronicle won the right to reveal that Stewart, who has pleaded not guilty to a single charge of assault against the 18-year-old, was from Barnsley.

However, PC Stewart’s address and the area of Barnsley where he lived had to be kept out of press reports until another appeal was lodged with Judge Geoffrey Marson QC. 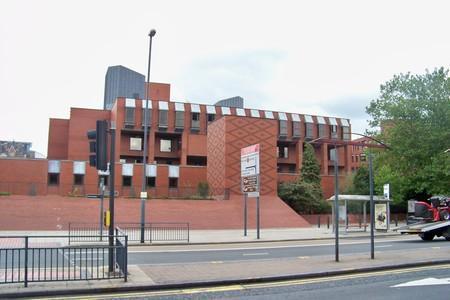 At the latest hearing, the judge was presented with a letter from the Chronicle saying that to grant some degree of anonymity to the officer was unfair to others accused of offences and identified in the media, and risked undermining the public’s faith in South Yorkshire Police, the court, and the justice system as a whole.

Addressing the Chronicle’s chief reporter Josh Timlin in court, Judge Marson said: “The letter and argument put forward in person on the Barnsley Chronicle’s behalf were both succinct and sensible.

“Police officers are not different to any other defendant who enters court and normal rules apply, unless there is a powerful reason as to why a detail should be omitted such as a city, town, village or street.”

Adam Birkby, defending, said PC Stewart’s role meant the first line of his address should not be made public due to sensitive work involving organised crime groups in South Yorkshire – something Judge Marson agreed with – but admitted he saw ‘no reason’ as to why Hoyland could not be made public.

He said: “Mr Timlin’s viewpoint is very sensible and I understand the submission as it puts forward the principles of open justice.

“Every case is different but I also note that reporting restrictions are regularly made by South Yorkshire Police in an attempt to cover cases involving its officers.

“PC Stewart’s work with organised crime groups, and the increased risk it brings with it, means that I prohibit the publication of his home address but this is a balancing exercise and I have no objection to the naming of Hoyland.

“This is something I have not found easy as it’s a finely balanced argument on both sides and if it wasn’t for the nature of PC Stewart’s work, I would have seen no reason but to make his first line of address public.”

The incident which gave rise to the case occurred near the Hillsborough Tap pub, in Sheffield, prior to Sheffield Wednesday FC’s clash with Chesterfield in the League Cup on 8 August 2017.

The alleged victiom in the case was initially charged with assaulting a police officer, but the charges were dropped when CCTV footage was uncovered and, following an investigation by the Independent Office for Police Conduct, PC Stewart was charged with assault.

PC Stewart was bailed and will appear for trial at Leeds Crown Court on 31 July.