Sister weeklies are petitioning the government to scrap the HS2 rail project because of the effect it will have on their patches.

The Bucks Herald and Advertiser Series have launched the petition, which calls for a final vote on scrapping HS2 for MPs – with a free vote for all ministers.

More than 5,400 people have signed the petition since it went live last Wednesday.

The bid is part of the JPIMedia-owned newspapers’ ‘HS2: Enough Is Enough’ campaign, which already has a Facebook group used by more than 1,000 readers to contribute ideas, discussion and experiences which informs how the titles cover the issue. 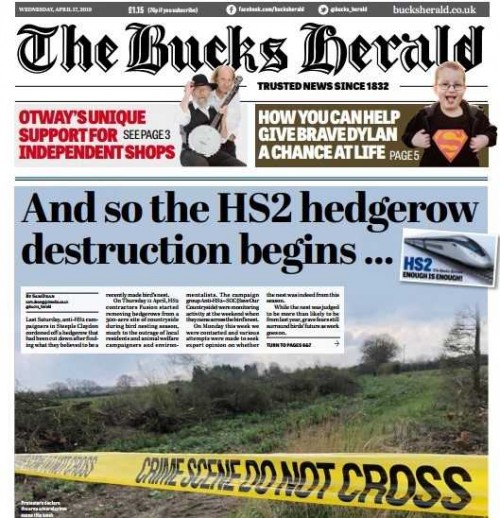 Bucks Herald and Advertiser Series editor Hayley O’Keeffe, said: “HS2 is a giant issue for the people of Buckinghamshire and South Northants. It cuts through pretty much all of our most loved beauty spots, will snarl up our roads during the construction process and will cut off our housing estates  – all the while giving the people of this area no benefit whatsoever.

“Our MPs, David Lidington, John Bercow and Andrea Leadsom are all career politicians, and while they would say otherwise — collective responsibility (or in Mr Bercow’s case the role of Speaker) prevents them from making a real dent in any fight against the scheme.

“Ironically — the three of them hold some of the highest seats in government — in safe seats courtesy of our loyal votes, so you can imagine the disgust our readers feel on this issue.

“The petition is designed to redress that balance and give the career politicians that our readers have so loyally voted for, the chance to stand up for the people they represent.

“Would they actually do so? Who knows – but we will keep applying pressure on behalf of the people of this area who are getting a very raw deal – and taxpayers at large because everyone in this country is paying towards this destructive and ill-thought-out scheme.”