A weekly newspaper has demanded action from its local MP against HS2 after delivering a letter signed by hundreds of readers.

HTFP reported in April how thousands had signed a petition set up by the Bucks Herald, which is calling for a final vote for MPs on scrapping the high speed rail project – with a free vote for all ministers.

The petition has now reach almost 10,000 signatures, but the Herald stepped up its ‘HS2: Enough Is Enough’ campaign last week by delivering a “hard-hitting” letter from more than 640 readers to the door of Aylesbury MP David Lidington, who serves as Minister for the Cabinet Office.

Discussing the issue, Mr Lidington previously told the Herald that the “country’s interests come first, then the interests of constituents”. 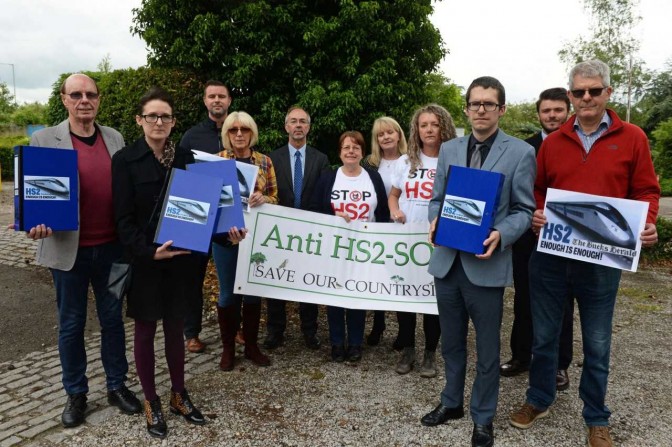 On the day Herald editor Hayley O’Keeffe and reporters Thomas Bamford, Sam Dean and Neil Shefferd were joined by the Conservative leaders of both the Aylesbury Vale District Council and Buckinghamshire County Council.

They were also supported by Joe Rukin, of the national Stop HS2 campaign, and local campaigners, as well as a representative of the more than 1,000 people who have signed up for Herald’s ‘Enough Is Enough’ Facebook campaign group.

Hayley said: “The biggest issue our area faces on fighting HS2 is that we are a county of safe seats and career politicians.

“They talk a good talk on how much they are doing to help residents, but the fact of the matter is they cannot vote against the scheme – and in Mr Lidington’s case are seemingly doing nothing to actively oppose it or speak out, at the highest level, despite their position of power.

“Our residents continually come to us about this issue – and we are representing their views.

“We were delighted to have support from the leaders of both Tory councils at the petition handover, showing that this is not a political issue – it’s a moral one.”