A local democracy reporter exclusively revealed that councillors had been officially warned about leaking information to the press – after the warning was leaked to him.

Jack Thomson, who works for the Paisley Daily Express as part of the BBC-funded scheme, reported on the caution, which has been issued to elected members of Renfrewshire Council by the authority’s chief executive Sandra Black.

The warning came after Jack had landed a previous exclusive, obtained via a leak, regarding the council’s plan to open talks with the owners of Chivas Brothers over the potential purchase of the whisky company’s Paisley site.

In a subsequent email to councillors on Wednesday, which was leaked to Jack, Ms Black told of the seriousness of “commercially sensitive” information” being made public. 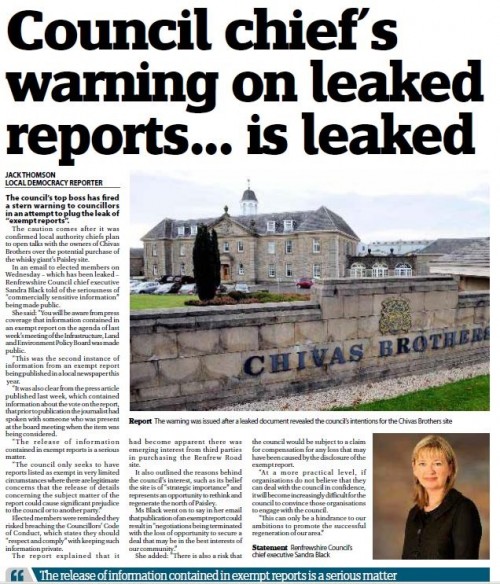 How the Express covered the warning about leaking

She wrote: “You will be aware from press coverage that information contained in an exempt report on the agenda of last week’s meeting of the infrastructure, land and environment policy board was made public.

“This was the second instance of information from an exempt report being published in a local newspaper this year.

“It was also clear from the press article published last week which contained information about the vote on the report, that prior to publication the journalist had spoken with someone who was present at the board meeting when the item was being considered. The release of information contained in exempt reports is a serious matter.

“The council only seeks to have reports listed as exempt in very limited circumstances where there are legitimate concerns that the release of details concerning the subject matter of the report could cause significant prejudice to the Council or to another party.”

Jack told HTFP: “Being present at the majority of council meetings has allowed me to build trust and relationships with local authority sources. That in turn has meant people have felt they can approach me when a story comes up.

“In this instance I was contacted about the original exempt report by one source before being shown the email by a separate source. Leaks are the backbone of journalism and this is a story I have enjoyed covering.”

Express editor Gavin McInally added: “This is a tangible and genuine example of local journalism we just wouldn’t see without the local democracy reporter post at the Paisley Daily Express.”