Defunct newspaper titles dating back to Victorian times are being revived as fake local news outlets designed to influence world opinion, it has been claimed.

An investigation by EU DisinfoLab, a non-governmental organisation that seeks to expose attempts to spread disinformation, has uncovered what it says is a worldwide network of sites designed to influence the European Union and United Nations by repeatedly criticising Pakistan.

DisinfoLab says its research has uncovered 265 fake local news sites in more than 65 countries, which it claims is “managed by an Indian influence network”.

UK titles alleged to be part of the network include the Aberystwyth Times, Brighton Herald, Eastern Morning News, Leeds Times and Manchester Times. 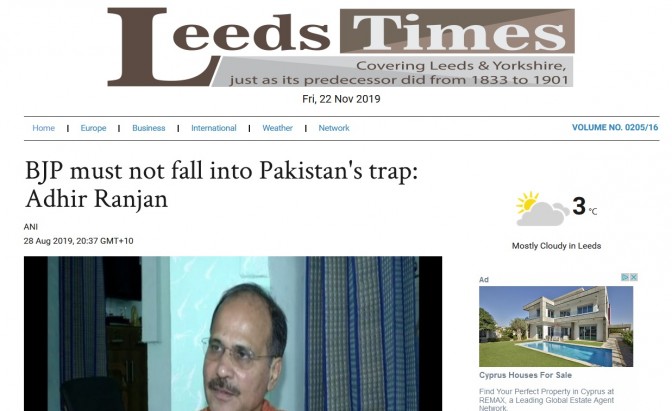 The NGO found most of the sites in the network were named after an extinct local newspaper or spoof real media outlets and featured coverage of the same Indian-related demonstrations and events, as well as republications of anti-Pakistan content.

Of the titles named in the report, HTFP found only the Leeds Times appears to have a currently functioning website.

Altghough its masthead and About Us page boasts that it ‘covers Leeds and Yorkshire,’ we found it contained no local stories with its content comprising entirely of national and international ‘news’ culled from other sources.

However the site’s parent company has denied any connection with the other UK publications named in the report.

John McAvoy, editor of the Big News Network, told HTFP: “Leeds Times is one of a large number of  global news sites we operate as part of www.bignewsnetwork.net and is administered by www.midwestradionetwork.com

“None of the names of the groups and entities, or sites referred to in the article below are known to us other than Voice of America.”

DisinfoLab says it will publish an extensive report on its findings in the coming weeks.

It said that the websites were created in order to “add several layers of media outlets that quote and republish one another, making it harder for the reader to trace the manipulation, and in turn offer a ‘mirage’ of international support”.

It further claimed there was also an attempt to “influence public perceptions on Pakistan by multiplying iterations of the same content available on search engines”.