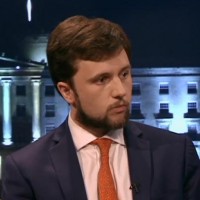 Union chiefs and politicians have rallied round a regional daily’s political editor after an MP called him “despicable and low character” in an online rant.

The DUP’s Ian Paisley hit out at Belfast News Letter journalist Sam McBride, pictured, in a 750-word personal attack published on Facebook in response to an analysis piece which appeared in Saturday’s newspaper.

The article had explored the possibility of the Northern Ireland Assembly returning by 21 October – the date on which abortion will be decriminalised in the region unless devolution is restored – and reported the views of DUP members who said they believed that the party had calculated that it would lose more votes by accepting an Irish language act, the likely price of restoring Stormont, rather than allowing the abortion change to go through.

Mr Paisley responded with what the News Letter described as “intemperate and defamatory claims” against Sam, including “false allegations”, a reference to his school and a description of him as a “despicable and low character”.

He later removed the post after News Letter editor Alistair Bushe wrote to him, but has yet to apologise for the remarks.

In his letter, Alistair wrote: “I was appalled to see your egregious and defamatory personal attacks on my political editor, Sam McBride, and on the News Letter… your statements are plainly false, and although I am not a lawyer, I have no doubt they are highly defamatory of him.”

Alistair added: “I sincerely hope that this matter will be resolved without delay, so that we can each move on to perform our different roles at this time of political crisis for Northern Ireland and the country as a whole.

“However, please understand that neither Sam McBride nor I will tolerate your attacks on our respective reputations, or allow your false assertions to go unchallenged.”

Sam himself posted on Twitter yesterday: “I am humbled by and deeply appreciative of the huge number of messages of support today – so many that I apologise for not responding individually, despite still being in the office trying to read through them.

“It is reassuring to see such public support for journalism and for truth.”

Séamus Dooley, Irish secretary of the National Union of Journalists, has described Mr Paisley’s comments as “unwarranted and unworthy of an MP.”

He added: “Mr Paisley has gone beyond the bounds of acceptable political discourse and has engaged in a personal attack which is extremely damaging. The consequences of this behaviour has been a vile reaction on social media.”

Ulster Unionist leader Robin Swann described Mr Paisley’s attack as “extremely disappointing” and “a clear example of where he has played the man rather than the ball”, while SDLP leader Colum Eastwood branded the MP’s comments a “total disgrace” and Alliance leader Naomi Long said “attacking a journalist so personally” was “bullying” and “completely disgraceful”.

A DUP spokesperson said: “To claim that the DUP has taken a decision to advance abortion in Northern Ireland in order to avoid an Irish Language Act is not just wrong but ignores the other preconditions Sinn Fein has placed ahead of a return of devolution.

“To quote the author’s words, such analysis would be ‘politically naive’. Concentration should be on the analysis rather than the author.”