Newspapers covering steelworking communities have lamented the collapse of British Steel and the potential effects on their patches.

Both the Scunthorpe Telegraph and Teesside Gazette splashed today on the company being placed into liquidation, putting 5,000 jobs at risk and endangering 20,000 in its supply chain.

Earlier this week, the Telegraph sent reporter Jamie Waller more than 100 miles north to Redcar to investigate the effect that the 2015 closure of its steelworks had had on the town.

His resulting story formed the basis of the paper’s coverage today, appearing on the below front page. 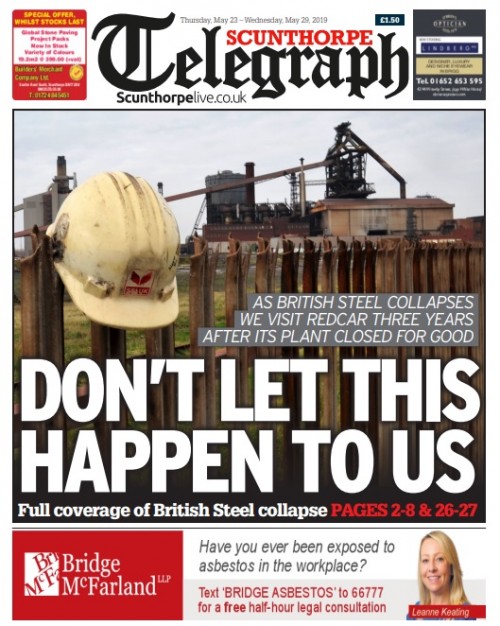 Jamie Macaskill, who edits the Telegraph’s Scunthorpe Live sister website, told HTFP: “The impact of the British Steel collapse will be huge on Scunthorpe and the surrounding community and we have been covering this rapidly developing story online since the crisis emerged.

“Earlier this week we had a strong sense this was not going to work out for British Steel so one of our Scunthorpe team, reporter Jamie Waller, was sent to Redcar which had suffered the loss of its steel plant in 2015. What he discovered was a town still reeling and a community deeply affected by the impact of that closure.

“An hour or so after Jamie arrived back in Scunthorpe the announcement was made about British Steel. The news broke just a few hours before our weekly print run on the Scunthorpe Telegraph and the team turned around 10-pages of coverage led by Jamie’s powerful piece about what he had found in Redcar.

“I’m very proud of the coverage. It’s our responsibility to keep the community informed at this time both online and in print. There is still hope for Scunthorpe steel and this is a story which will continue to dominate our coverage in Scunthorpe in the coming weeks.”

The Middlesbrough-based Gazette had previously covered the Redcar closure, and ran a black-tinged front page epitaph to the steelworks at the time.

The paper again employed the same colour on its cover today, with an image of a lone steelworker accompanied by a quote about how the industry had again been “shafted” by both private investors and the government. 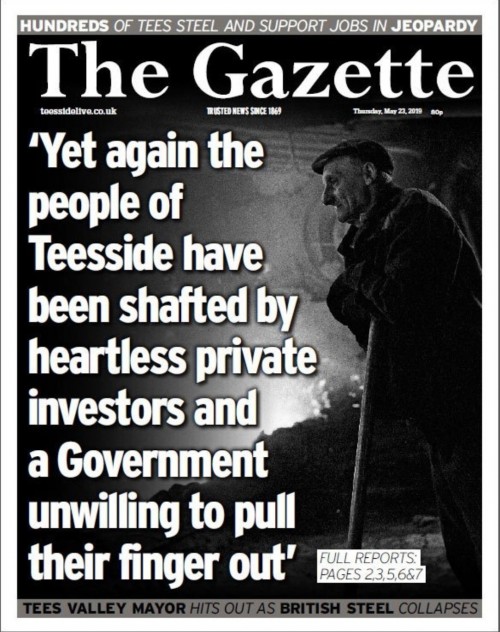