The Scottish National Party has made the decriminalisation of drug use an official policy following a daily newspaper’s campaign.

The SNP has backed the plan after the Daily Record launched its Addicted campaign earlier this year.

The campaign calls for more action on drugs after after an investigation by the Glasgow-based daily drew the conclusion that drug dealers must be targeted, but that it was time to stop treating addicts as criminals.

The call for decriminalisation was carried on the Record’s front page in July, and the paper also splashed on the SNP’s adoption of the policy on Monday. 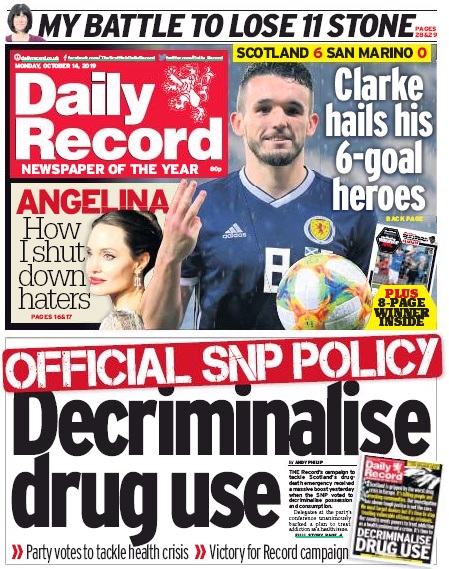 Editor David Dick told HTFP: “The fact the policy was adopted unanimously at SNP party conference is testament to how much the debate has developed and how fast public opinion has evolved.

“The Daily Record’s journalism effectively tested the water, potentially advancing the debate by months or years at a time when action is urgently needed.”

Chief reporter Mark McGivern, who ran the campaign, added: “The Record’s front page in July shocked many people and was seen as a risky move but it served to open up the drugs debate.”

Activists at the SNP’s annual conference in Aberdeen supported the decrminalisation move, branding the current Misuse of Drugs Act, which dates back to 1971, as “not fit for purpose”.