Daily uses front page to demand decriminalisation of drug use

A daily newspaper has taken the radical step of calling for the decriminalisation of drug use on its front page.

The Daily Record has “laid its cards on the table” and backed the idea in order to help those struggling with addiction.

On its front page last Thursday, the Glasgow-based Record said Scotland was “gripped by the worst drug crisis in Europe”, which was “killing people and wrecking communities.”

An investigation by the paper had led it to the conclusion that drug dealers must be targeted, but that it was time to stop treating addicts as criminals. 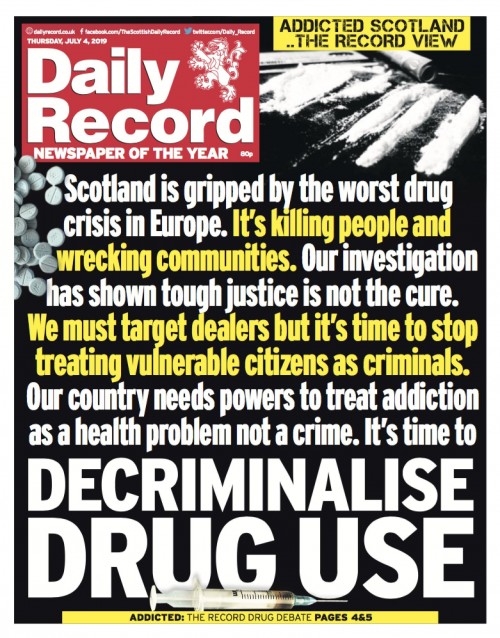 An accompanying editorial reads: “The Record is now laying its own cards on the table – we support any moves to focus on getting people off drugs while hammering the greedy dealers at the root of the problem. If that means we stop jailing powerless addicts at the bottom of the drugs chain, then that’s what we must do.

“And if it means the UK government handing over the power to Holyrood to finally start applying progressive and effective solutions to this unmitigated crisis and getting more people into treatment, it should do it without delay.”

The Record has touted the idea of a legal drug consumption room in Glasgow, claiming such facilities have “saved thousands of lives across Canada, Spain, France Germany and other nations.”

However, the opening of such a facility would require amendments to UK law that would amount to “some kind of decriminalisation” of people who take the drugs into such facilities.

It added: “The Record has waged its own war, constantly exposing the gangsters and dealers who flood our streets with drugs such as heroin cocaine, pharmaceutical pills and street drugs cooked up in makeshift factories by the million.

“For the sakes of everyone in Scotland, we must now look to win the hearts and minds of afflicted people whose lives are increasingly forfeit to the addictions. The best way to do that is to start treating them better.”