A retired regional journalist with cystic fibrosis has fulfilled his daughter’s dream of writing a book with her father.

Martin Smith, who worked at the Coventry Telegraph between 2002 an 2012, has helped his seven-year-old daughter Emily achieve the feat after she came up with a string of characters and the plot for a Christmas book for children.

Martin, who retired from journalism two years ago for health reasons, has now used her help to write The Christmas Poop Plan – a tale of three naughty elves who decide to ruin a family Christmas.

Martin, 40, managed the Telegraph’s website as multimedia editor for more than six years. 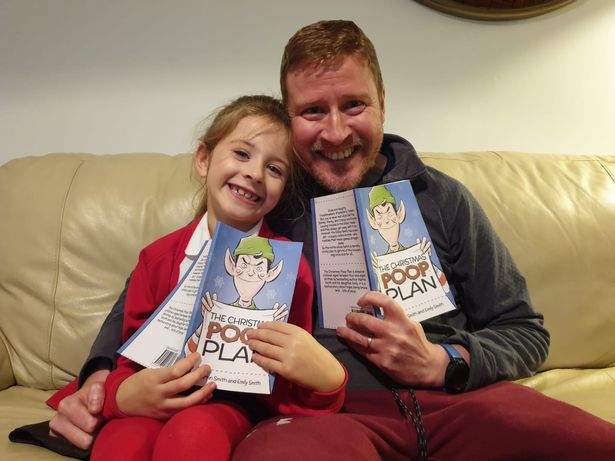 Martin and Emily with their book

He also wrote the Charlie Fry Series – a collection of books about a young footballer with CF who becomes the world’s greatest player – to raise awareness about the life-limiting illness.

Martin told the Telegraph: “Emily has always dreamed of writing a children’s book with me.

“I was working on my own story series – Charlie Fry – and struggling to find the time to balance starting something else.

“To be fair, she went off, made the plot herself and dreamed up the characters – and it was pretty good. All I had to do was piece it together.”

It is not the first time Martin, who also worked for the Brackley Post during his career, has made the news with Emily.

Two years ago they fronted a national Christmas campaign to raise awareness of his condition for the Cystic Fibrosis Trust.

Martin, who spends more than four hours every day taking medication and undergoing physiotherapy to keep his lungs stable, added: “Living with a life-limiting condition can be challenging, particularly for those closest to you.

“That’ why every second counts. I know that – in future years – Emily will be able to look at The Christmas Poop Plan and think: ‘me and my dad made that’.”