Retired journalist has story he began almost 40 years ago published 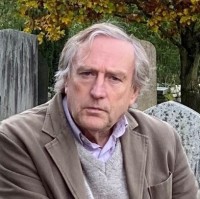 A former deputy news editor has published his debut novel – almost 40 years after he first got his inspiration for the story.

Allan Tunningley, who worked for newspapers in Yorkshire and Cumbria before his retirement last year at the age of 67, will see his book Gilgarius published today.

During his career, Allan worked on titles including the Pontefract and Castleford Express, Sheffield daily The Star, the short-lived Yorkshire on Sunday and the Westmorland Gazette, where he was deputy news editor from 2007.

The novel, which features a child-eating monster, started out as a short story that Allan, pictured, wrote on old Imperial portable typewriter in 1982.

He said: “It took me less than an afternoon to set it down, but I never sought to have the story published. That was around the time of Britain’s Falklands conflict with Argentina and that may have had something to do with my frame of mind.

“I remember thinking that fighting over possession of land is ultimately futile. When we create borders, we establish stress points that can be exploited in all sorts of ways, like creating some kind of monster.

“That’s where the idea for child-eating Gilgarius came from. Children are the ones who suffer the most terrible harm from conflict and it can cause a lifetime of damage.

“Anyway, I put that first story away and thought no more about it until it was rediscovered among some old documents that I was sorting out back in 2008. I re-read the story and had a feeling I could make more of it. And that’s what I’ve finally done with Gilgarius.”

Allan, who lives in Kirkby Lonsdale with Latvian-born wife Natalja, stresses that although it is a story featuring a young protagonist, Gilgarius isn’t a children’s book.

He added: “I hope the novel will appeal to readers on different levels.

“It can be read as a fantasy and as an epic historical adventure; while on another level it can be viewed as an allegory for today’s troubled world with all its evils. But ultimately, I hope all who read it will find that at its heart it is very much a moving love story.”

Gilgarius is published by Settle-based 2QT Ltd, and is available from the author direct by emailing allantunningley@sky.com or from Amazon Books.