A court reporter has successfully fought to name the school where a teacher who was jailed after having sex with a pupil worked.

Derby Telegraph journalist Martin Naylor argued it was in the public interest to reveal 49-year-old Mark Fidler was a music teacher at Belper School, arguing the chances of the victim being identified as a result would only be one in 675.

Martin had covered Fidler’s guilty plea at Southern Derbyshire Magistrates’ Court last month, but a court order prevented the Telegraph from naming the school at the time.

Before Fidler was sentenced at Nottingham Crown Court this week, Martin made the court clerk aware he wanted to name the school and she informed the judge, prosecution and defence. 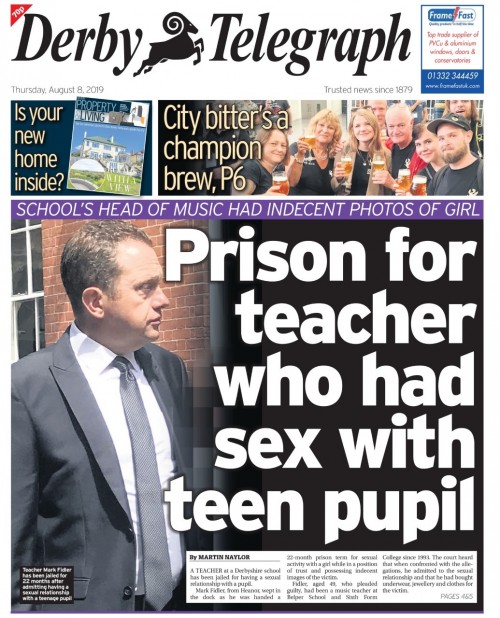 The Telegraph splashed n the sentencing on Thursday

Martin told HTFP: “When it was called on, the prosecuting barrister made the application asking for a press ban on naming the school in fear that it might identify the victim.

“I was asked by Judge Steven Coupland if I had any representation and I stood up in court and argued that the school website boasts 1,200 pupils and another 150 in its sixth form.

“I said that means assuming a 50/50 split between boys and girls it would mean any person who did not know the story or background would have a 1 in 675 chance of knowing who the victim was. I also argued that the order is in place to protect the victim and not the defendant or the establishment where he worked.

“After hearing the representation, Judge Coupland immediately ruled that we could name the school in the public interest and that by doing so it would not ID the victim.”

Added Martin: “Standing up in open court as a reporter to challenge orders is something I have done many times before, sometimes with success but more often without, so it was rewarding to see the application thrown out. Even with my experience it is always daunting and slightly nerve-racking to pit your wits against fully-trained legal representatives and, for want of a better phrase, win.

“Open justice is a cornerstone of the legal industry and I would like to thank the judge for firstly hearing my representation and secondly ruling in our favour.”

The court heard the girl had sent Fidler, who has worked at the school since 1993 and had been head of music since 2002, a topless photograph of herself as well as pictures of her in her underwear.

The pictured were found on a memory stick in a drawer in Fidler’s office by one of his colleagues after he was dismissed in December 2018 following an internal investigation.

He was spotted alone with the victim in his classroom, and he later admitted they had been away together and had sex, while he had also bought her gifts such as underwear, jewellery and clothes.

Leanne Summers, prosecuting, told the court that, as part of the police investigation, Fidler’s phone had been seized and it was discovered he had been Googling whether what he and the victim were doing was illegal or not.

Fidler had pleaded guilty at the previous hearing to one count of sexual activity with a girl while in a position of trust and one count of possessing 13 indecent images of the victim – 10 pictures and three videos.

Andrew Wesley, defending, said Fidler had children of his own who he now no longer sees and has no previous convictions of any kind, adding he started suffering depression following the break-up of his relationship with his former partner.

Mr Wesley added: “It was when there was nothing left to hide that he co-operated with the police. He is fundamentally an honest man who lost sight of his responsibilities as a teacher and an adult.”

Sentencing Fidler to a 22-month jail term, the judge told him: “You should have taken steps to distance yourself from her but instead you moved closer. She gave no victim statement but the reality is the damage this has caused her is impossible to quantify.”

Martyn Cooper, head teacher at Belper School, told the Telegraph he wanted to reassure patents and wider community that pupils’ wellbeing was of “paramount importance”, while there was “no evidence to suggest that any other pupils were put at risk.”