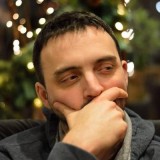 A regional publishing chief who pioneered the use of data journalism across his group’s titles is leaving his role after six years.

David Ottewell, pictured, has announced he is stepping down as head of data journalism at Reach plc.

David founded the unit along with deputy Claire Miller in 2013, when it was set up by Reach forerunner Trinity Mirror.

Prior to that, he held roles including chief reporter, political editor and hub news editor at the Manchester Evening News.

Announcing his departure on Twitter, David said: “I’m enormously proud of everything we’ve done. I’m proud of the long-form data investigations but also the daily stream of data-based stories. I’m proud that most of our content is based on ideas; that we try to set rather than follow the agenda.

“I’m proud of the many, many hundreds of public-interest front pages – the kind of thing people who don’t really read the news think don’t exist any more – that have come from this team.

“I’m proud of the innovation – the interactives, the gadgets, the tools that we’ve built – which have had a profound and measurable affect on our audiences.

“I remain steadfastly sceptical of journalism awards – but I am secretly extremely proud of the many national and international awards that both the team collectively, and it’s brilliant individual members, have racked up.

“I’m proud of the impact we’ve had within Reach, on the industry as a whole, and on the excellent data teams that have followed in our wake. I’m proud we’ve balanced quality & quantity and worked with the industry and readers we have – not the ones we’d want.”

David went on to thank the editors and senior management at Reach “that had the faith to start the team, allow us to pursue of our vision, and give us the resources to build so rapidly”.

He added: “I’d like to thank the editors and reporters across Reach titles: our aim has always been a collaboration between data insight and local expertise, and this could only ever work through partnership with you.

“Most of all though I wanted to say thanks to the team (past as well as present) for their brilliance, creativity and dedication. Our success has been their success far more than it has been mine.”

HTFP has approached Reach for a comment on who will succeed David in his role.