The Northern Echo splashed on yesterday’s victory against New Zealand this morning, after three players from the North-East of England featured in the winning side.

Ben Stokes and Mark Wood, who both play domestically for Durham, were among those to lift the trophy, with Stokes playing a starring role with the bat both during England’s innings and the subsequent Super Over tie-breaker. 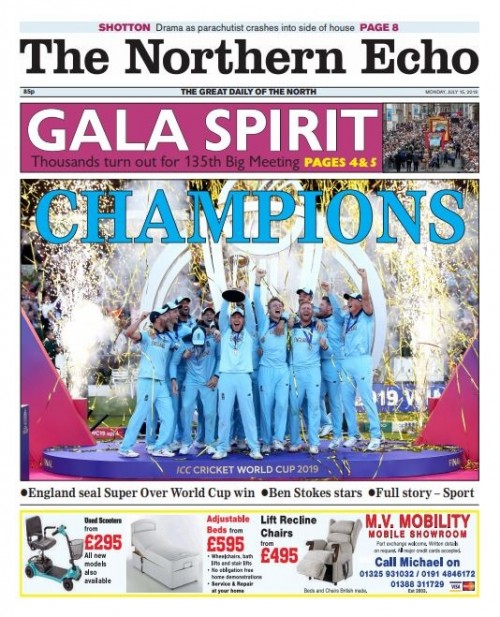 Hannah Chapman, editor of the Darlington-based Echo, told HTFP: “Our region loves its sport, and with a large number of the England team having links to Durham and Yorkshire ­and with Ben Stokes at the centre of the drama – we had to do something a bit different.

“It was hard to choose from the many brilliant pictures, but in the end we went with a podium photo to reflect the scale of the celebrations.”

The victory was also marked by the Yorkshire Post on its front page today. 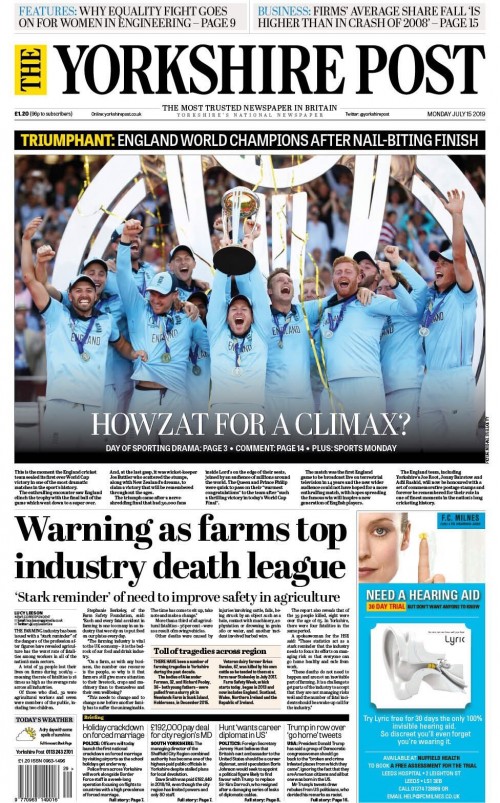 Three Yorkshire-born players featured in England’s XI – Joe Root, Jonny Barstow and Adil Rashid – while Plunkett was also born within the county’s historic boundaries and played for Yorkshire after leaving Durham in 2013. He moved to Surrey last year.

In the below tongue-in-cheek post on Twitter, Post editor James Mitchinson also addressed previous claims by Bairstow that some critics had been “waiting for England to fail” at the tournament.

For the record: The Yorkshire Post was never ever – not for one second – one of those hoping England would lose! @jbairstow21 @ECB_cricket