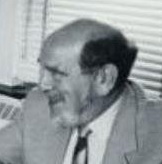 A regional journalist who went on to edit the Jewish Chronicle has died aged 90 after a short illness.

Tributes have been paid to Geoffrey Paul, left, who began his career writing for local newspapers including the Denbighshire Free Press and Barnsley Chronicle.

Geoffrey went on to work for the public relations department of the Jewish Agency, before moving back into journalism via the Jewish Telegraph Agency and subsequently as assistant editor of the Jewish Observer and Middle East Review.

He joined the Chronicle in 1958 and held a number of positions at the title, before serving as its editor between 1977 and 1990.

According to an obituary in the Chronicle, the paper pursued a path of constructive criticism regarding Israel’s actions under his editorship – a policy continued to this day.

“As a writer and correspondent he redefined what it meant to work for the JC.

“As editor of the JC he was wise, thoughtful, inspired and prescient – exactly the qualities he had as a man. He was also a mensch.

“I will always revere him and be grateful for his counsel and ability to cut to the heart of any issue.”