A regional daily spoofed a famous First World War recruitment poster in a bid to inspire the football fans of its patch.

The Gazette, Blackpool, parodied the 1914 ‘Lord Kitchener Wants You’ poster on a front page which called on Blackpool FC supporters to attend their club’s remaining home matches this season.

Thousands of fans returned to Blackpool’s Bloomfield Road home ground for the first time last month after a mass boycott of matches over the Oyston family’s running of the club which lasted several years.

But The Gazette ran a special report about the current situation at the club last Friday, along with the front page rallying call featuring Lord Kitchener wearing a scarf in Blackpool’s tangerine and white colours. 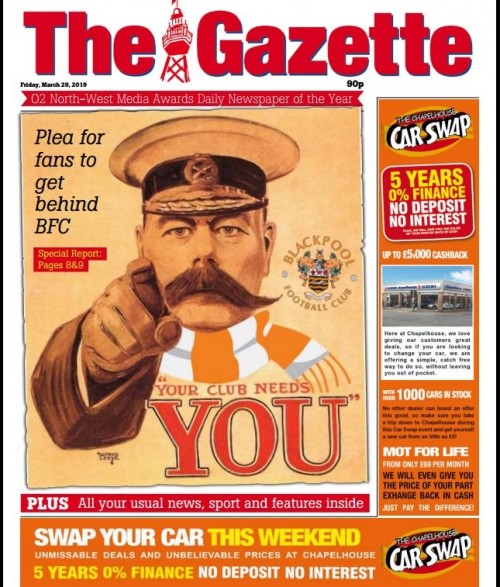 Editor Gillian Parkinson told HTFP: “Our Blackpool FC reporter Matt Scrafton has been discussing with the club how to ensure fans are attracted back to games following the end of the club boycott.

“We wanted to throw the weight of The Gazette behind this so content editor Simon Drury worked with Dean Mellor in the JPI design hub to come up with the idea of the Kitchener poster.

“We decided to give him a Blackpool scarf for good measure.

“We hope to work much more closely with Blackpool FC in the future and this was a great opportunity to show our support.”