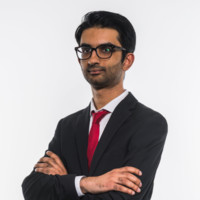 A regional daily journalist has begun to trial making audio versions of his stories available for website readers who are pressed for time.

Yorkshire Post business reporter Ismail Mulla, left, used online audio distribution platform Soundcloud to record a version of a feature he wrote in order to help those who don’t have time to read the piece on a screen.

Ismail regularly listens to podcasts while working at his desk, which inspired him to try the idea.

His first trial run of the innovation saw him record a seven-minute-long audio clip of a feature he had written about a Leeds-base firm’s managing director.

Ismail told HTFP: “We usually write stories and attach videos, where possible. I’ve been doing a lot of video as part of our business coverage in recent months to better engage with our audience. Videos obviously are a good way to increase dwell time on your stories.

“I, personally, was beginning to find that I’d start reading a feature and think that’s really interesting. But not having the time to read it there and then I’d either leave the tab open, bookmark the page or send myself a link. However, often I’d forget about them or just not have the time to go back to them.

“I do listen to podcasts as I work because you’re not glued to the screen. So I thought why not record a feature being read with direct quotes spliced in at the relevant points. Not too dissimilar to an audio book or a radio package – although the key difference is that you stay as true as possible to the words written in the actual feature.”

Of how his idea had been received by readers, he added: “It’s too early to tell regarding its reception. A few people have said they like the concept but I’m keen to polish it a little more maybe add more ambience to the audio package without losing authenticity.

“Hopefully this will result in increased dwell time on stories and fewer people abandoning features because they haven’t got the time to be sat in front of the screen.”