A regional daily journalist has hit out at a driver who “nearly killed” him in a near-miss on a country road.

Worcester News reporter Tom Banner has recounted his near-death experience after was forced to swerve off the road late on Saturday night.

Tom has shared dashcam footage from his car, which shows an oncoming vehicle trying to overtake a lorry – narrowly avoiding him.

The incident took place on the A4133 in Worcestershire. 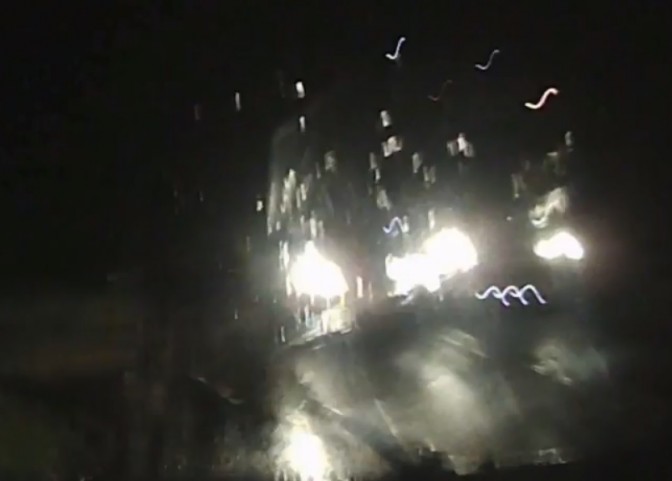 A still from Tom’s dashcam footage shows the near-miss between himself and the overtaking car, the headlights of which can be seen on the left

In a piece about his experience, Tom wrote: “While on the way home from Worcester late on Saturday night I was very nearly killed in a head-on collision with another car.”

He added: “I almost could not believe it when I saw the headlights of the car headed straight at me, the idea of being mere seconds away from being at best injured, at worst killed, suddenly kicked my reflexes into action and I swerved off the road to avoid the car.”

Tom says the incident proved why having a dashcam is becoming “increasingly useful” for drivers.

He wrote: “I was lucky that in this case there was no accident and did not have to make a claim, but if I had needed to and not had a camera, any claim would have been much harder to prove.

“To the driver of the car, whoever you are, I say this: I was lucky on Saturday night that my reflexes were quick enough that I could swerve out of the way, but next time you try to do something like that, it might be someone whose reactions are not as good and cannot get out of the way, and you might just be responsible for injury, even death, to both them and yourself.

“You may have been very busy, rushing to get somewhere, just a bad driver, or drunk, I do not know. But please make this a lesson to show some care behind the wheel.

“Doing something as insanely dangerous as what you did on Saturday night could cost you your life, not to mention other motorists, pedestrians or animals unfortunate enough to be on the same road as you.

“So if you are reading this, I hope you learn your lesson.”