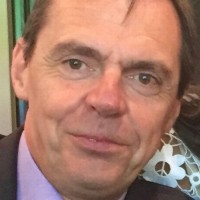 A regional daily newsroom is mourning the loss of its production chief following his death aged 55 from throat cancer.

Tributes have been paid to Mike O’Connell, pictured, who was print production editor at the Huddersfield Daily Examiner and also previously served as its deputy editor.

Huddersfield-born Mike joined the Examiner as a trainee reporter in 1984, after training in Sheffield, and never left the newspaper.

He was diagnosed with tonsil cancer in February this year, but later discovered the disease had spread.

Examiner editor Wayne Ankers said: “Mike was a true gentleman. He was a true professional who always managed to stay calm and polite no matter how much pressure he was under.

“He was pretty much part of the furniture at the Examiner having worked with the paper and website for more than 30 years.

“He loved his work even when it became really challenging over recent years and his dedication to the people of Huddersfield always shone through. He was one of the best and a huge loss to journalism. Everyone at the Examiner is devastated.

“But away from work he was a dad and husband and our thoughts are with [wife] Geraldine and his children during such sad times. We just hope they know they have an Examiner family here for them whenever they need it.”

Mike, who died in Overgate Hospice, Elland, last week, is also survived by his and Geraldine’s two children, 20-year-old twins Eve and Niall.

According to the Examiner’s obituary, Mike was “very weak” at the end, but was still able to ask one of his sisters to buy a birthday card for Geraldine, to whom he had been married since 1988 and who turns 54 in a couple of weeks.

Examiner columnist Denis Kilcommons described Mike as a “top class journalist from a different time” and said: “Believe it or not I was his training officer. We spent a lot of time training in The Albert pub next to the old office.”

Reporter Andrew Robinson added: “A lovely man with a great sense of humour. It was a pleasure working with him. A proper newsman and a gentleman too.”

And journalist Anne-Marie Senior said: “A truly lovely, caring guy to work with, always there with a witty joke to lighten any situation.

“A real pleasure to know, he’ll be greatly missed. My thoughts are with his family.”

Donations in lieu of flowers will be collected for Overgate Hospice.