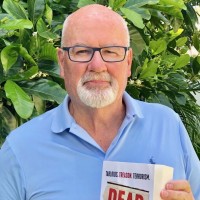 A former daily newspaper editor has written a new novel set in a tabloid newsroom.

Terry Quinn, who edited titles including the Daily Record, Bradford Telegraph & Argus and the Edinburgh Evening News, has written Deadline as a sequel to his debut novel The Scoop.

Deadline is a political thriller set in the world of UK tabloids, featuring The Scoop character Jonno Bligh and his partner Annie.

According to Terry, also a former editorial director of Thomson Regional Newspapers, some of the newsroom action in the book was based on his own past experiences.

He said: “Publishers say ‘write what you know’ and that’s what I did.

“It was a joy to write. Stirred up a lot of memories – good and bad – from my dodgy days as a redtop editor.”

Terry, pictured, added: “Much of the newsroom action is based on stuff that actually happened. Only the names have been changed to protect the guilty.”

Deadline will be published by Simon & Schuster Australia on 1 February 2020.