Readers have backed a weekly newspaper’s call to move four courts on its patch into a single purpose-built location.

The Kent Messenger wants to get Maidstone’s courts and police station all based at a central site, and 78pc of people surveyed have said they agree with the idea.

The Messenger’s bid comes as part of its Maidstone Vision campaign, in which it has set out potential developments it would like to see come to fruition in the Kent town.

However, Maidstone Borough Council has revealed a proposal for housing on the same site the Messenger is recommending should become a ‘legal hub’ – a plan editor Denise Eaton believes would be a “much-wasted once-in-a-generation opportunity.” 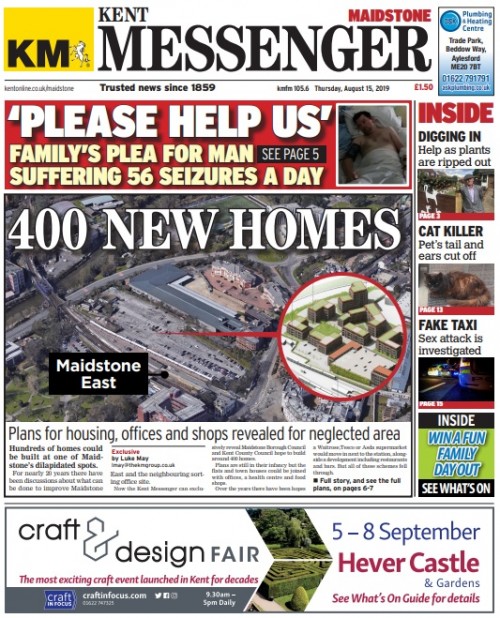 Denise told HTFP: “The idea for the KM’s vision for Maidstone came when Network Rail started preparatory work on a revamped Maidstone East, one of the town’s main rail hubs and the primary commuter link to London. Maidstone Borough Council had also recently announced five regeneration zones around the county town – none of which involved two key parts of the town, one has even been subject to planning speculation for the past 16 years.

“We decided to take matters into our own hands and draw up our own vision for the town, one that made the most of one of its most valuable assets, the river Medway. We also focused on the fact that the crown and county court, an 80s eyesore which blocks access to the river, and the town’s police and magistrates’ courts were not only based in different parts of the town, but they all shared a similar dilapidated state no longer fit for purpose. The town’s coroner’s court is also in a different location and due to be moved out of the town centre entirely, thus creating more accessibility issues.

“It made sense, to us at least, to provide a central base for police, magistrates, coroners, crown and county courts with a purpose-built hub on land which has lain redundant for 16 years. Such an approach would also free up the riverside to create much-needed housing on one side and a bank of floating restaurants on the other, providing an attractive proposition for potential residents and visitors, while also helping to boost high street trade.

“It seemed very much like a sensible win-win situation. Our ideas have sparked much debate among readers, and has encouraged people to engage with the council regarding what could be achieved. A poll suggested 78pc of readers agreed it was a great idea.”

The Messenger’s idea has won the support of Conservative councillor Jonathan Purle, who suggested it “seemed rather nicer than what is actually being cooked up”, while Mark Smurthwaite, chair of Medway River Users Association, described it as “well written and informative.”

He said: “We as the Medway River Users Association have been working for years to promote the River to all who could benefit from its use, but the council seem to have a real barrier when it comes to anything to do with this amazing asset that the county town has.

“The lack of interest and action needed to maintain and promote this asset is severely lacking… thank you for highlighting the River and hopefully more people will come to see its potential.”

John Foster, head of regeneration and economic development at Maidstone Borough Council, said: “It is great to stimulate ideas about the county town of Kent and we welcome positive, constructive ideas for improving Maidstone town centre and the river area.

“We would be happy to discuss these with any interested parties and also recognise that many of these sites are not in the council’s ownership.”