A weekly newspaper’s campaign has been given the royal seal of approval as the title marked a visit by the Queen to its patch.

The Messenger ran a front page wraparound to mark the occasion, as well as further coverage inside.

Editor Denise Eaton told HTFP the paper’s team had beaten a tight deadline to turn the edition around. 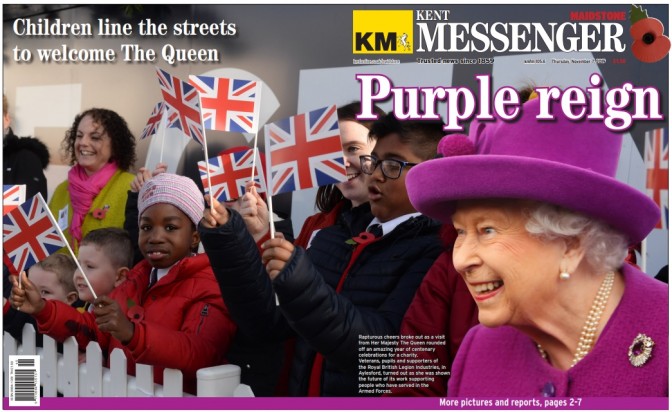 She said: “The visit not only coincided with the Royal British Legion Industries’ 100th anniversary celebrations, but also gave the KM’s campaign the royal seal of approval.

“We switched the press schedule around to give us a fighting chance of getting the special wrap and six additional pages of inside coverage across to Iliffe Print – but HM’s itinerary meant we had to work frantically to turn it around in an hour.

“Our year-long campaign aims to see the completion of funding for a £22 million Centenary Village to celebrate 100 years of employment, training, accommodation, care and support for veterans of all conflicts – old and more recent.”

Work on the latest phase of the project, which includes 22 fully accessible apartments, 16 family homes and 24 assisted living homes, is due to begin in the near future.

Denise added: “It was a great boost for all those involved in RBLI – and we couldn’t ask for higher endorsement of our campaign – to receive a visit from HM The Queen; her second trip to RBLI (the first was in 1975), and her third to the area (the first in 1956) which is also home to Royal British Legion’s Aylesford branch.

“You could say we achieved The Triple Crown, but perhaps now is not the best time for a triumphant rugby reference.”