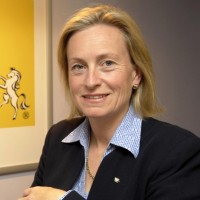 The chairman of an independent publisher is stepping down amid a senior management shake-up at its parent company.

Geraldine Allinson, chairman of the KM Group and a former president of the Newspaper Society, will leave the business tomorrow, with KM owner Iliffe also announcing a number of other personnel changes.

Geraldine, pictured, will be succeeded as managing director by James Gurney, the current MD of the Newbury Weekly News, who will head up an enlarged business unit comprising the KM Group and the Berkshire title.

Iliffe Media Group is also combining its publishing units in the East and the Midlands, with the newly enlarged division being headed up by current Iliffe Media East MD Ricky Allan.

Richard Parkinson, presently MD of Iliffe Media Midlands, will take up the new position of group development director and will be responsible for establishing consistent group standards, policies and approaches to sales, marketing, branding, reporting and audience monetisation, across all platforms.

Editorial director Ian Carter will see his brief extended from the former KM businesses to cover the whole group, and will be responsible for establishing consistent standards and efficiencies across all editorial departments and working with editors to maximise audience growth.

The KM Group was previously owned by Geraldine’s family, and she took up its chairmanship from her now-deceased father Edwin Boorman in 2006.

Geraldine also served as president of the Newspaper Society in 2012 and was is the third generation of her family to take the title, following her grandfather HR Pratt Boorman in 1960 and father Edwin in 2001.

Iliffe took over KM’s 13 weekly newspapers, as well as the Kent Online news website and radio station kmfm, in 2017.

The Newbury Weekly News was purchased in May by a joint venture set up by Iliffe chairman Edward Iliffe and Scottish Provincial Press director Peter Fowler, with the intention of integrating it within Iliffe Media’s operations.

Edward Iliffe said: “I would like to thank Geraldine for the service and dedication that she has shown to the KM Group over the past 25 years and in particular for the past two years service since Iliffe Media acquired the KM Group.

“I am pleased to say that Geraldine will remain as a non-executive director of Iliffe Media Group and will continue to represent the group at an industry level, providing continuity with the NMA, the Radio Centre and PA.”