The mother of a young regional journalist who died has produced a book of heartfelt letters written in the months after is death.

Louise Bates has penned Letters To Matthew: Life After Loss about Matthew Bates, former news editor at the Stratford-upon-Avon Herald.

Matthew, pictured, died in October 2016 at the age of 27, after being diagnosed with Type 2 Papillary Renal Cell Carcinoma, an extremely rare and aggressive tumour that affects only five per cent of kidney cancer sufferers.

Louise, who is 60 and from Leamington Spa, began writing the letters as a form of therapy and hopes the book will help people talk about grief “in a much more comfortable way.” 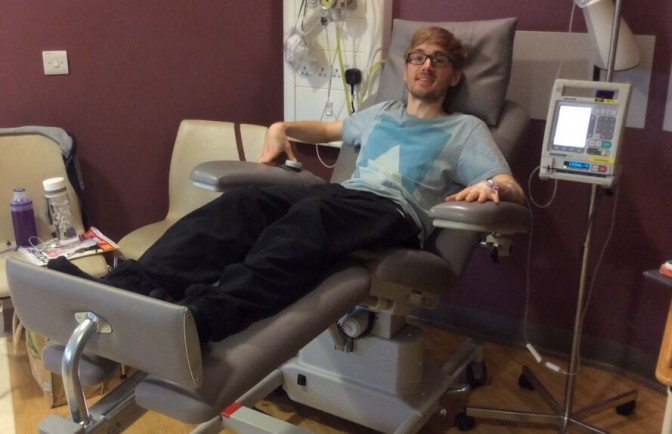 She said: “One day I was peeling the vegetables and all of a sudden I was surrounded by this energy of Matthew and it was like he was there with me.

“It was the weirdest feeling, like he was giving me a virtual hug and saying he liked my letters. And I got a picture of a book in my head. It’s as if Matthew was saying this needs to be a book mum.”

She added: “My wish is that my book helps people talk about grief in a much more comfortable way without all the awkwardness that comes with it. I want people to be okay about grief. I want to help other people understand what grief is. There’s also tips in the book about what to say and how to be. And hopefully, by reading the letters and sharing my experience of what it was like for me, it might help them in the future.

“This book is not about fixing people or forcing the healing process because, as the book explains, there is no cure for grief. Grief can only be absorbed, carried, experienced and cared for. You never get over loss, you just learn to grow around it and move on in a positive way. I’m still just taking it a day at a time.”

After graduating in journalism at Brighton University, Matt took his first job as a reporter in 2010 on the Coventry Observer and was later recruited to the Herald by then-editor Amanda Chalmers after she created the news editor role.

Amanda told HTFP: “In 30 years as a journalist – around 10 of those involved in recruitment – Matt stands out as one of that rarest of breeds – a true journo whose instinct and nose for news had no off switch. His appetite for a good story was voracious.

“He threw creative ideas down on the table that no one who had been in a profession for just four years had the right to know. An understanding of how to find – and treat – a story was second nature to him. He showed empathy, curiosity or tenacity as the situation demanded and it was a pleasure to see his efforts – and results – play out day after day.

“An affable nature also made him both approachable to interviewees and a quick hit with the news team. I was soon at ease with my leap of faith in making this appointment. This was a star waiting to shine its brightest… Unfortunately fate had other ideas.”

Amanda, who left the Herald last year to launch her own business called Chalmers News PR, met Louise last week for the first time in her new public relations capacity when she was preparing to write a press release about the book’s launch.

She added: “While it’s lovely to get to know this wonderful lady (who we’d heard so much about in the office), one wished it could have been under happier circumstances.

“The heartfelt collection of letters she wrote to Matt during the year after his death was launched on what would have been Matt’s 30th birthday this month, and also includes inspirational quotes and insights into her journey of self-discovery.

“Its contents brought a tear to my eye – but it is Louise’s hope that the book will leave a positive impact on those struggling to navigate their way through the pain of grief.”

The book can be purchased here, while a further tribute to Matt by Amanda can be found here.