A departing cabinet minister used a weekly newspaper to say “goodbye and thanks” to her constituents.

Nicky Morgan wrote to the Loughborough Echo to bid farewell to the constituency she has represented since 2010.

Mrs Morgan announced last month she would not stand in the forthcoming general election, citing the abuse MPs face among her reasons for doing so.

The culture secretary wrote a “special letter” to constituents following the announcement, which was published in full inside this week’s Echo. 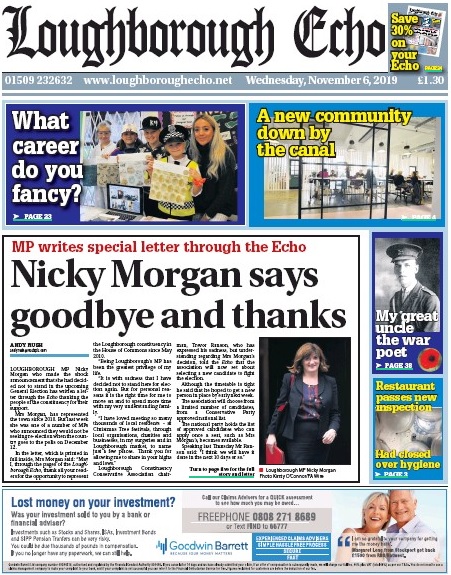 In the letter, which was trailed on the Echo’s front page, she wrote: “May I, through the pages of the Loughborough Echo, thank all your readers for the opportunity to represent the Loughborough constituency in the House of Commons since May 2010.

“Being Loughborough’s MP has been the greatest privilege of my life.

“It is with sadness that I have decided not to stand here for election again. But for personal reasons it is the right time for me to move on and to spend more time with my very understanding family.”

Echo editor Andy Rush told HTFP: “It’s typical of her and the relationship she has with the paper, regardless of any politics.

“I wasn’t surprised at all that she’d want to tell everybody in that way.”

HTFP reported last week how another senior Tory, Sir David Lidington, had announced his own decision to stand down in the Bucks Herald.