A judge has kept secret the identity of a youth found guilty of manslaughter despite a regional daily’s fight to name him.

The Lancashire Telegraph had challenged reporting restrictions protecting the boy, who was sentenced to six years detention after being convicted of the manslaughter of Sajed Choudry and unlawfully wounding his son Ahsan Choudry.

Aban Quaynor, chief reporter at the Blackburn-based Telegraph, had argued at Preston Crown Court that there was a strong public interest in open justice, adding that naming the boy would act as a deterrent to young men considering arming themselves with weapons.

But Mr Justice Dove rejected an application on the grounds he believed this would pose a significant risk to the prospects of the defendant’s eventual rehabilitation. 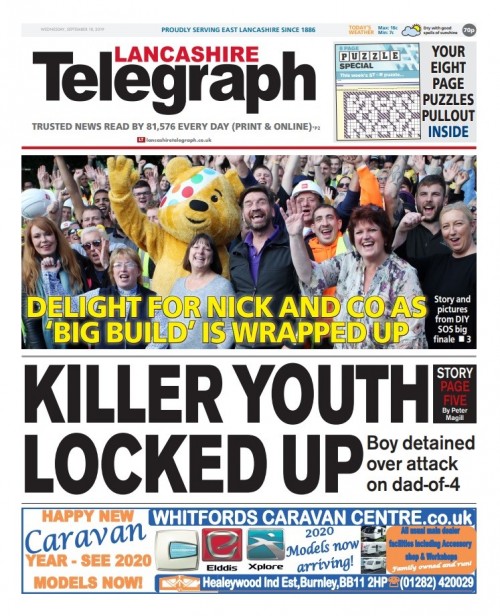 The Telegraph splashed on the sentencing on Wednesday

Mr Choudry suffered a raft of horrific injuries after an outburst of violence near his Blackburn home in November 2018, which led to his death, while his son Ahsan was left with “life-changing” wounds to his hand after he was hacked with a machete.

Sadaqat Ali, his brother Rafaqat Ali, their father-in-law Fazal Ilahi, 63, and another man Syed Ali Akbar, were all sentenced to life imprisonment for Sajed Choudry’s murder at a previous hearing.

The boy, whose age can also not be revealed for legal reasons, had participated in the attack, although the judge accepted he had not landed any of the blows which caused the death of Sajed Choudry or caused serious injuries to his son.

But Mr Justice Dove noted that the youth, from Blackburn, was still armed on the night in question, and could be observed encouraging and supporting the violence inflicted on the pair.

Karl Holbrook, group editor for Newsquest in Lancashire, told HTFP: “It was a tough balancing act for the judge as he had to take into account the defendant’s age, but we felt it was right to challenge the order.

“Our chief reporter Aban Quaynor, who has followed the case through the courts put together our submission to the court. In it, he argued manslaughter is a grave crime and the defendant played a part in an incident which led to one man being killed, another suffering life-changing injuries and his co-defendants being sentenced to a total of 100 years.

“This was a crime which shocked and concerned the community and we argued that there was a strong public interest in open justice, including the identities of all those who found guilty of the crime. We also asked the judge to consider naming the defendant to act as a strong deterrent to others, especially young men considering arming themselves with weapons.

“The judge himself noted that the youth was armed on the night in question and could be observed encouraging and supporting the violence inflicted on both men.”

Peter Wright QC, defending, had told the court his client had no previous convictions and was thought of highly by all who had come into contact with him.

But passing sentence, Mr Justice Dove told the youth: Passing sentence, he said: “While there is an element of misfortune in finding a person of your tender age before this court, to be sentenced for these serious criminal offences, this is as nothing compared to the tragedy that has befallen the Choudry family. Sajed Choudry, a beloved husband, father and son, was brutally murdered.”