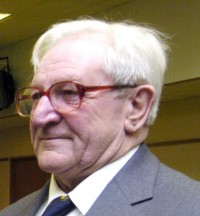 A regional journalist who worked in the same area for 44 years has died aged 92.

Tributes have been paid to John Rickett, pictured, who served titles including the Shropshire Star, Wellington Journal and Shrewsbury News.

Wellington-born John had volunteered for the Army after leaving school towards the end of the war, but did not see active service.

He returned to Wellington and joined the Wellington Journal and Shrewsbury News as a reporter covering Craven Arms and then Ludlow.

John covered local courts and councils for the titles, as well as the Shropshire Star.

He was married to Lynda, with whom he had sons Jonathan, Ian and Peter.

Lynda told the Star: “He was very happy in Ludlow and worked for the Star and Journal for 44 years.

“He enjoyed a long and happy retirement until his death, on 5 November.”

John’s funeral is on 26 November at 3.30pm at Wyre Forest crematorium, in Stourport.