A regional journalist who suffers from PTSD after being stabbed and left for dead has written a book about how running is helping him recover from his ordeal.

HTFP reported in 2016 how Sussex Newspapers arts editor Phil Hewitt was stabbed twice in the leg during a Valentine’s Day mugging – just 90 minutes after realising his dream of watching the England cricket team play in Cape Town, South Africa.

Phil, pictured, suffered a panic attack in a quiet shopping centre back home three weeks later, and at that point resolved to “sort himself out” by writing down every last detail of the ordeal and returning to his first love of running.

His resulting book ‘Outrunning The Demons’ is now available. 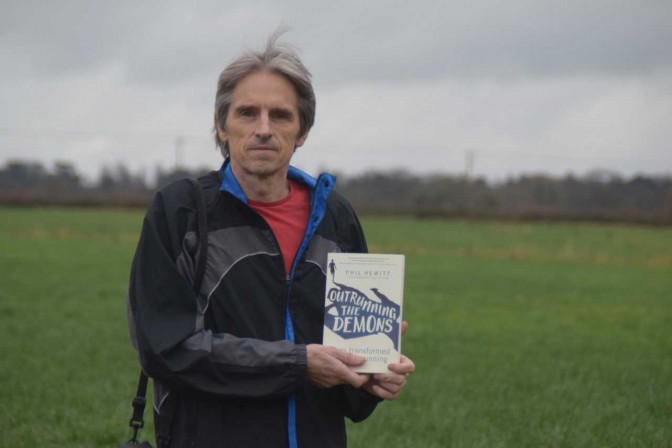 Reflecting on his ordeal, Phil said: “I was rescued by a passing pizza delivery driver who picked me up, bundled me into the back of his car and whisked me to hospital. I ended up with 15 stitches, three broken ribs and a messed-up head.”

He added: “I have still got PTSD and I really can’t see it shifting any time soon. I know my memory is atrocious. I am ludicrously, embarrassingly, exhaustingly jumpy. And the moment I thought I was going to die… well, it has become my default setting.

“I long for an empty mind, but the moment I stop actively thinking about something else, I am back on that pavement in Cape Town believing I am just about to breathe my last. But running has since helped hugely – and so has chatting with the runners I have interviewed for the book.”

The book features 34 interviews with people from the UK, USA and Australia who have “been to hell” and since found running to be the “surest, quickest, safest way back”.

Phil said: “Just the act of running, of putting one foot in front of the other, lifted something. It got through the mess in my head. Running hurt like hell. Broken ribs. Flesh barely healed. But something lifted. Running gave me strength.

“Running makes me me again, and it was running that started to put me back together again – a story I wanted to tell. I approached publishers Bloomsbury in London. They asked me to broaden the story, to interview runners around the world who have shared experiences similar to mine, and in that moment, Outrunning The Demons was born.

“The book starts with my first marathon after the stabbing, my 31st marathon in all. It finishes with that marathon’s finishing line, a moment when the emotion was simply overwhelming.”

Of those he interview, he added: “These are people who have lost loved-ones to murder, have been caught up in terrorism, have suffered depression, addiction, alcoholism or bereavement, have been viciously attacked, have braved horrid illness, have suffered the horrors of war or been on the wrong end of outrageous misfortune.

“These are fantastic people. Wonderful people. Open. Warm. Wise. Generous. Brave. Just fabulous. I am really hoping their stories will touch people as much as they have touched me.