A journalist who suffered “catastrophic” brain injuries in an unprovoked street attack has been honoured after fighting back to return to work in the regional press.

Sports writer Gary Carter, who was in a coma for six weeks after being punched to the ground in London after covering an England rugby league international in 2015, was awarded a Stand Out Award for his courage and determination at last night’s O2 Media Awards North West.

Gary spent four years in rehabilitation, learning how to walk and talk again, before joining the editorial team at Local Communications Limited, publishers of the Saddleworth Independent, to rediscover his writing and interview skills.

Gary, who began his career on the Tameside Reporter before stints at the Lancashire Telegraph, Manchester Evening News and The Sun, was given a standing ovation by guests at the ceremony at the AJ Bell Stadium, in Manchester. 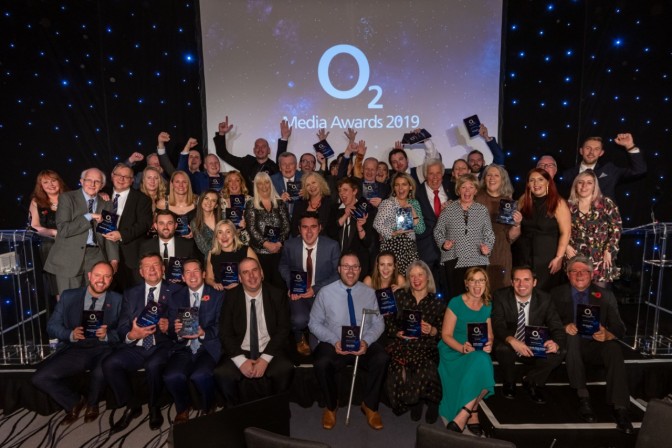 Gary, pictured at the front in blue, with his fellow winners

The Liverpool Echo was the big winner on the night, scooping five awards including Daily Newspaper, On-Line and Most Memorable.

Echo political editor Liam Thorp beat more than 50 news reporters from across the region to be crowned News Reporter of the year, while James Maloney won the Photographer category.

Nicola Green, director of corporate affairs at O2, said: “The O2s showcase excellence in news, sport, entertainment, social and community media and applaud the growth of creative industries in the North West.

“This year’s entries once again highlighted the impact the media has on our communities.”

Documentary: Blakeway North – ‘My Life, I Will Survive’

Community Award: The Sentinel – The Way We Were