A journalism training centre and news agency has opened a new office in West London.

News Associates has relocated its headquarters in the capital to Twickenham having been based in Wimbledon for the past 14 years.

The new office, at Ampersand House, on York Street, was officially opened on Thursday by The Sun’s royal photographer Arthur Edwards.

News Associates celebrated the event with some novelty scissors and a plaque in honour of their special guest. 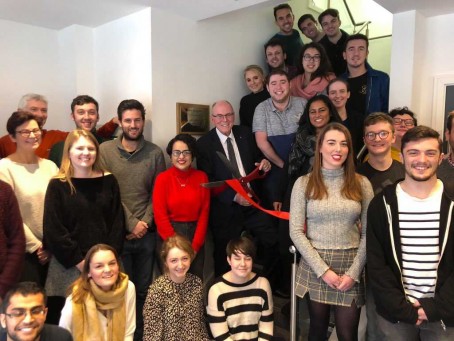 Cutting the ribbon, Arthur said: “It’s a great life journalism, I love it. It’s just been for me a great adventure and I just hope you can get an adventure like I have.

The agency had been based in Wimbledon for 14 years, seven of them in its most recent headquarters, before it moved out prior to Christmas.

News Associates managing editor James Toney said: “Others may have got Prince Charles to open their office – we went one better and got his favourite photographer to do it.

“It was brilliant to have journalism royalty and Fleet Street legend Arthur Edwards with a very big pair of scissors at our London office.

“Thank you for being such a brilliant guest, it’s something our trainees will always remember.”