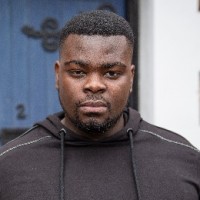 A journalism student has shone a spotlight on human rights abuses after an investigation into dementia in Ghana.

Kirk Asiedu, who studied at the University of Northampton, discovered instances of elderly people with dementia in the West African country being accused of witchcraft, assaulted and burned alive.

Kirk’s findings were revealed in a radio documentary he produced which has been nominated for Best Radio Documentary in the Broadcast Journalism Training Council Awards.

In the documentary, which he made in the final year of his Multimedia Journalism degree this year, Kirk also discusses his Ghanaian family’s own experiences of dementia.

Kirk, pictured, who graduated in July, said: “To be recognised with this nomination gives me a huge feeling of accomplishment, in that the story I set out to tell, and the style in which I told it, is being recognised in a national competition.

“I would love to win the award, which should hopefully push the story even further and get it noticed – when you hear about what people are going through in Ghana, it’s heartbreaking, so I hope the documentary can help to raise awareness and help to improve the situation.”

He added: “The documentary affected me, emotionally, quite a lot, because dementia is so close to home for me – it’s affected my auntie and my wider family.

“My auntie is the person who raised me from when I was a toddler, before I came to this country and reconnected with my mum at the age of four, so it made me very emotional, especially because of how the way people with dementia can be treated in Ghana.”

Deputy dean at the university Kate Williams, who supervised Kirk’s radio project and is herself a BBC Radio broadcaster, added: “Kirk showed a professionalism and maturity in his approach to a difficult subject area, telling the story from a very personal point of view. I am delighted he has been shortlisted for this prestigious award.”

“Our multimedia journalism course is accredited by the Broadcast Journalism Training Council and for one of our students to be nominated in their annual awards is fantastic news.”

The awards will be held in London next Tuesday.