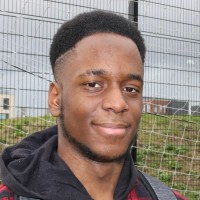 A journalism student has scored a media role at the Euro 2020 football tournament thanks to an initiative aimed at increasing diversity in sport reporting.

Marvin Onumonu, pictured, who studies multimedia sports journalism at the University of Northampton, has won a press pass to cover the tournament thanks to a mentoring programme sponsored by the Mayor of London.

Run by the Black Collective of Media in Sport, the Diversity of the Sports Media programme aims to increase representation in the industry by mentoring around 40 aspiring journalists, aged 18-25, from groups currently underrepresented in the industry including ethnic minorities, the LGBT community, people with disabilities and those from disadvantaged backgrounds.

Marvin, who is originally from Luton, will now take part in 10 masterclasses in the lead up to Euro 2020 which will focus on skills such as writing, commentary, photography, match reports and interviewing.

He said: “This is an amazing opportunity for me to take my career to the next step.

“We have a trip already organised to visit the BBC in London to shadow their sports team and are meeting some influential people in the industry, so the experience is invaluable.”

“I think it’s still the case that there are not enough BAME journalists working in sport, and hopefully this programme will help to open up doors for myself and the others on the programme.”

The tournament will be staged in 12 European cities, including London, next summer.

Former BBC and ITV sports broadcaster Leon Mann, founder of BCOMS, said: “It is vital we challenge the glaring under representation of groups that bring greater diversity to the sports media. A diverse sports media, is a better sports media.”

He added: “Ultimately, a sports media lacking diversity does not fulfil its potential and lacks the competence to deliver a high-quality service.”