A newspaper picture editor who photographed everything from sporting tragedies to famous rock stars has died aged 70.

Tributes have been paid to Ronnie Anderson, former picture editor at the Glasgow-based Sunday Mail.

He was also on the scene at the 1971 Ibrox stadium disaster, which claimed the lives of 66 people at a Rangers v Celtic football match. 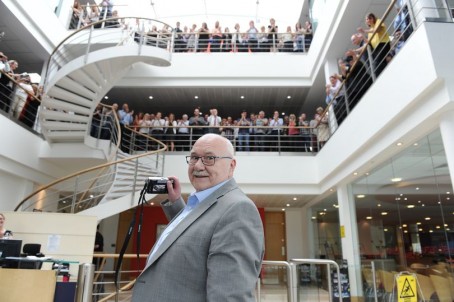 Mail and Record colleagues bid farewell to Ronnie in 2014

Long-time colleague Ian Stewart told the Daily Record: “He loved mingling with the stars and had a story for every one of them, whether it was local talent or worldwide superstars. He treated them all the same. He had time for everyone and was an extremely sociable person, which helped put anyone he was photographing instantly at ease.

“He was hugely popular among his friends and colleagues and would always visit when we had moved down to London and he was passing through for a job in France or further afield. His death was a shock to us all and he’ll be greatly missed.”

Ronnie began his career in the dark room at the now-defunct Glasgow Evening News, later moving to the Record and its Sunday sister title the Mail.

At the Mail, he worked as second in command on the picture desk and had risen to become picture editor at the time of his retirement in 2014.

“He was also a very proud Glaswegian. Almost all of his best work was produced in Glasgow and his favourite artwork reflected his love of the city.

“Like most industries, there are rivalries within Scottish journalism and over the years the occasional childish squabble. But Ronnie rose above all that. In retirement, he took genuine delight at seeing former colleagues doing well, wherever they plied their trade.

“It is tragic that his retirement was too short. But he leaves behind an incredible legacy thanks to the medium he loved.”

His funeral service will take place at Craigton Crematorium, in Cardonald, Glasgow, at 12.30pm on Monday.