A Hollywood star has backed a weekly newspaper’s campaign to return a royal artefact to is patch – prompting it to run a splash in homage to one of his most famous roles.

Ewan McGregor has lent his support the Perthshire Advertiser’s bid to return the Stone of Destiny, used since ancient times to crown Scottish – and later British – monarchs, to Perth.

The Advertiser secured the Perth-born actor’s support for the campaign after making contact through his mother.

It prompted the paper to run a front page inspired by the 1996 film Trainspotting, in which Mr McGregor starred as drug addict Mark Renton, substituting the opening two words of the film, “Choose Life”, with “Choose Perth”. 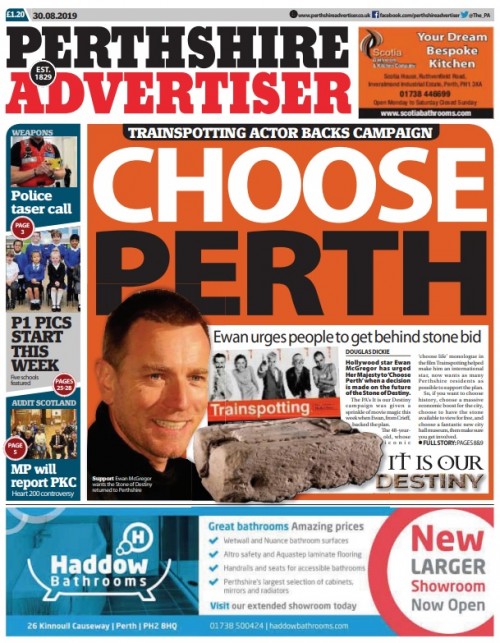 Editor Douglas Dickie told HTFP: When we started the campaign we were determined to add a sprinkle of ‘star dust’ with some celebrity backing – and there is no bigger celebrity from Perthshire than Ewan.

“We were able to make contact with him through his mum, who was a huge help through the whole process. He indicated he was going to back it and then sent us a few lines.

“At first, I was wanting something that played on his role in Star Wars, but when I thought about Trainspotting the ‘Choose Perth’ headline came straight to mind.

“I let our subs know I wanted that as a headline, but it was their idea to have the orange background to mimic the Trainspotting logos. They did an incredible job and the front page really stands out, much like they did earlier this year when we changed our masthead to the colours of the Pride flag to mark the first ever Perth Pride parade.”

It is not the first time a Scottish newspaper has been inspired to run a Trainspotting-related front page.

In 2017, the Daily Record backed Labour on General Election day with a front page which was inspired by Mr McGregor’s opening soliloquy in the film, while earlier this year Glasgow-based daily The Herald splashed on a parody of the same speech in order to address the “chaos” caused by Brexit.

The Stone of Destiny, also known as the Stone of Scone, is currently housed at Edinburgh Castle, but Perth and Kinross Council wants to make the stone the centrepiece of a revamped Perth City Hall and a public consultation has been launched into the artefact’s future.

The Queen herself will have the final say on the matter.

Douglas added: “Hopefully Ewan’s intervention has the desired effect and we’ll see the Stone of Destiny back in Perthshire.”