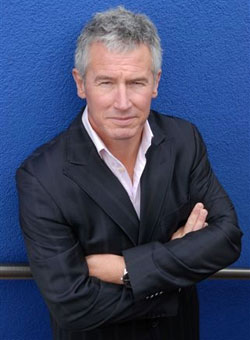 A businessman who held a series of senior roles in the regional press industry has died aged 59 after suffering a heart attack while playing tennis.

John Bills, left, forged himself a notable career in the local press after starting out as a motors adverising rep for the Mansfield Chad in the 1980s.

He went on to become a regional managing director with two publishing giants, first with Trinity Mirror and subsequently with Johnston Press.

John had recently retired with his partner Jo to a new home in Northern Ireland where he died last week while playing tennis. His funeral took place yesterday.

Born and brought up in Mansfield, John left the Chad to join Trinity Newspapers which in those days was a smaller publisher based mainly around Merseyside and North Wales.

He later helped oversee the merger with Mirror Group which created Trinity Mirror and became regional MD for the new company’s North West and North Wales division, based in Liverpool.

He then moved to Birmingham as West Midlands regional MD where, in 2007, he was involved in an audacious bid to buy the Birmingham Post, Birmingham Mail and Coventry Telegraph in a management buy-out after TM put the titles up for sale.

The following year he joined Johnston Press, which by then owned his former paper, the Chad.

And his career came full circle in 2011 when he was appointed managing director for JP’s North Midlands and South Yorkshire division which included the Mansfield weekly.

John was promoted to group managing director in 2014, managing the other regional MDs within JP and reporting directly to the then chief executive, Ashley Highfield.

He finally left JP in September 2017, prior to its re-emergence as JPIMedia last year.

Yorkshire Post editor James Mitchinson, who worked with him at the Chad, said: “John taught me a style of management that helps to challenge and develop people in the right way, in the hope they fly higher than you ever could. He’ll be sorely missed.”

David King, chief executive of JPIMedia added: “John’s personal commitment and determination had a real impact on the people around him. Our condolences have been sent to John’s family.”

Tributes have also come from outside the industry, notably from the world of club rugby of which John was an avid follower and sometime participant.

Mansfield Rugby Club chairman Andy Foster said: “This is desperately sad news. There will be many people who would have known John either through our rugby playing days, work or school and this will come as a shock.”

“Our thoughts are with his partner Jo and all the family at the sad loss of a truly remarkable, wonderful and extraordinary man who was an inspiration to many of us as well as a much loved friend.”

Graeme Roberts, who knew John through Wirral RUFC from his time on Merseyside, said: “I suppose it should be a comfort that he died doing something he enjoyed. I can certainly verify that he gave his all when he played tennis. On the rare occasions I took a set off him he took it as a personal insult!”