A firefighter-turned-journalist has defended her former comrades after a television documentary about their handling of the Grenfell Tower disaster.

Lancashire Telegraph reporter Amy Farnworth, who worked for the Scottish Fire and Rescue Service from 2008 to 2014, has written about her experiences of fighting fires and saving lives, following the airing of a Channel 4 Dispatches programme examining the role of the emergency services in responding to the tragedy.

During her time with the service, Amy, pictured, worked out of several different stations in the Strathclyde region, including Springburn, a busy station in Glasgow.

Since leaving, she has worked for Blog Preston and the Liverpool Echo before taking up her current role at the Blackburn-based Telegraph in September. 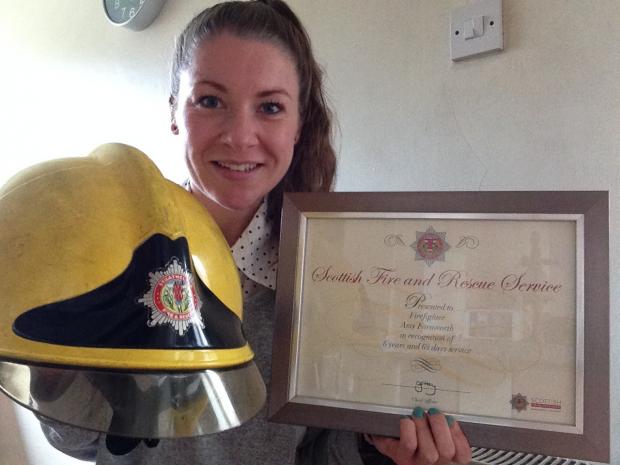 Describing her time as a firefighter, Amy wrote: “In those six years I saw a lot. I cut people from cars, evacuated buildings, rescued people from buses overhanging cliffs, extinguished warehouse fires, and exhausted myself trying to put out raging grass fires, not unlike the fires on Winter Hill [in Lancashire] last year. And I ran into burning buildings carrying more than 30kgs of equipment on my person. All without hesitation. Not all my rescues were successful. Not all the people I pulled from buildings or cut from cars survived.

“And despite the training, despite the number of incidents a firefighter goes to throughout their career, no single fire is the same. You cannot predict the way fire acts. You can use your training to assess a situation, but nothing can prepare you for running into a burning building. Nothing.

“Every time the bells sounded and we received a turnout slip with the words ‘persons reported’ on it, my heart skipped a beat. To say I was nervous about what lay ahead would be an understatement. But regardless of the nerves, of the apprehension, of the thoughts that ran through my mind, I ran into those buildings because that was my job, that was what I had trained to do.”

Amy decided to resign from the service due to a “long list of factors”, including experiencing her first fatality and struggling to rescue “terrified people” stuck in a burning block of flats due to her fire engine being unable to get close to the building.

She added: “I remember many of the thoughts that ran through my mind when I attended incidents during my six years as a firefighter, but I imagine none will ever compare to the thoughts running through the minds of the men and women who were called to the Grenfell fire.

“Grenfell was an unprecedented tragedy, and regardless of what happened, there are lessons to be learned, but it is my belief that the fire service did all they could that night to help save those people.

“Being a firefighter is one of the toughest jobs you could ever undertake, but it is also one of the most rewarding, and I would not change my time in the service for anything.

“Regardless of the outcome of the Grenfell investigation, I am proud of the London Fire Brigade. The emergency services are there to help, and firefighters risk their lives every day to try and save people – just like Ewan Williamson [a firefighter who died in the line of duty n 2009] did in Edinburgh – and for that, they should be commended.”