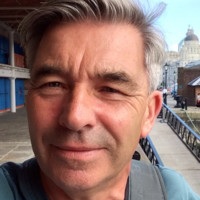 A former regional daily editor has launched a new hyperlocal newspaper to serve part of his old patch.

Alan Qualtrough, left, who was editor-in-chief of the Western Morning News and Plymouth Herald between 2005 and 2012, has set up the Stonehouse Voice to cover the Stonehouse area of Plymouth.

The free 16-page title is “written by the community for the community”, and was launched last ten days ago to coincide with the first day of the Plymouth Art Weekender.

The project is funded by Power to Change, an independent charitable trust that supports community businesses across England.

Alan, who now runs his own art practice and print studio in Plymouth, said: “Democracy depends on people having access to good, accurate news journalism in their local area – but for too many communities this is sadly lacking these days.

“Launching the Stonehouse Voice has been a hugely rewarding experience that has demonstrated just how many people across the community want to contribute and tell their stories.

“It’s exciting to launch our first edition at a vibrant cultural event like the Plymouth Art Weekender.”

According to Power to Change, the bi-annual Stonehouse Voice has “outsold its own expectations for advertising”, with any surplus revenue being used to pay the newspaper’s contributors.

Alan’s intention is to turn the title into a Community Benefit Society so that it can provide a model for other community journalism projects across the country, and it has already appointed a six-strong editorial board featuring representatives from organisations across Plymouth.

Mark Gordon, director of communications and partnerships at Power to Change, added: “Community journalism is increasingly important for people who want to stay informed and connected to what’s happening in their local area.

“We’re delighted to provide funding to support the launch of The Stonehouse Voice, which demonstrates the positive impact of different people coming together to make life better for the whole community.”