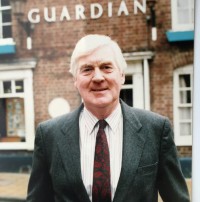 An editor who ran a weekly newspaper for a quarter of a century has died aged 85.

Tributes have been paid to Ken Wilson, pictured, who edited the Knutsford Guardian between 1969 and 1994.

The length of his tenure remains a record for any editor of the Newsquest-owned title.

Ken, who died in hospital after a short illness, started his career as a trainee reporter in the sports department of the Warrington Guardian after leaving school.

One of his early highlights was covering the Isle of Man TT races when he was just 17.

After two years’ National Service in the RAF, he returned to Warrington and two years later became chief reporter at the Newton-le-Willows and Golborne News.

Twelve years later he was appointed editor in Knutsford, where he was “always proud” of the number of young journalists he trained who went on to hold prominent positions in the media.

Sue Briggs, who served as a junior reporter under Ken aat Knutsford and succeeded him as editor following his retirement, said: “He was an incredible man, a true gentleman and the best boss you could wish for.”

After Ken retired, he and his wife Jane went to live in North Wales but in 2009 they moved to Devon.

Ken leaves his wife, son Mark, daughter Julie and twin grandsons. His funeral is due to be held at Exeter Crematorium this Thursday at 11am.