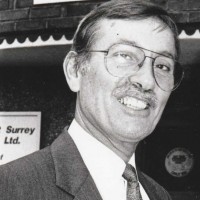 An editor who ran a weekly newspaper for more than 20 years has died aged 83.

Tributes have been paid to David Wilson, left, who edited the Surrey Comet, in Kingston upon Thames, from 1973 to 1994.

Prior to his time there, he had also edited the Banbury Guardian.

After leaving the Comet he worked for a while as a sub-editor on the Richmond & Twickenham Times, and edited the Wandsworth Borough News before retiring in 2000.

Jill James, the Comet’s first female assistant editor, said: “[David was] an incredibly energetic and enthusiastic Yorkshireman who stayed in local journalism for most of his working life.

Born in Halifax in 1936, David joined the Driffield Times as a junior reporter after leaving grammar school at 16.

After national service he got a job on the Hull Daily Mail, later switching to the Yorkshire Post.

In 1960 he moved to Oxfordshire, joining the Heart of England newspaper group as a sub on the Banbury Guardian.

David later became editor of the paper, overseeing the change to web offset.

In 1970 he got a job as a senior lecturer on the NCTJ course at Highbury College, Portsmouth, taking on the Comet job three years later.

David died suddenly at home on 28 May, and is survived by his wife Barbara, son, two grandsons and three great-granddaughters.