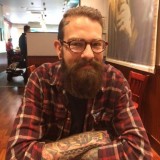 Worcester News editor Michael Purton says people have a “tendency” to make the assumption and subsequently post comments which are “incredibly upsetting” for the family of the person who has died.

Last August the News reported on the death of Worcester tattoo artist Jack Allender, pictured, and readers posting on the newspaper’s website and Facebook page had made suggestions he had taken his own life.

Mr Allender’s friends subsequently publicly denied the rumours which were being posted.

The News has now clarified that the 29-year-old died of natural causes, after his grandmother contacted the paper about the results of his post-mortem examination.

Michael, who has previously served as voluntary media officer for Gloucestershire-based charity Suicide Crisis, penned an editorial on the back of the story, questioning whether people are too quick to assume a sudden death is a suicide.

Wrote Michael: “With mental health issues so firmly in the public spotlight at the moment (and that’s not a bad thing), people have a tendency to assume that suicide is the cause when a seemingly healthy young person dies suddenly.

“That was certainly the case with Worcester tattoo artist Jack Allender, who died in August last year aged 29. Posting on the Worcester News website and Facebook, there were suggestions that Jack took his own life, prompting his friends to come out and deny the rumours.

“When someone who has died is falsely accused of suicide, it’s incredibly upsetting for their family and friends. So you can understand why Jack’s grandmother, Linda Burrows, has contacted the Worcester News to say that the post mortem results have shown that Jack died of natural causes.

“She naturally wants people to know that Jack did not commit suicide because, of course, someone who takes their own life feels they have nothing left to live for, and that most definitely was not the case with Jack, who had a daughter, his own business and many loving friends and family members.”