A regional daily which campaigned for justice for 21 terror attack victims has welcomed the reopening of inquests into their deaths – more than 44 years after the atrocity.

The Birmingham Mail successfully campaigned for inquests to be reopened into the deaths of 21 people who died in the 1974 Birmingham pub bombings, after the newspaper’s content editor Andy Richardson discovered in 2014 that the hearings had never been completed.

The coroner of the time, George Billington, had stuck to normal procedure of opening and adjourning the inquests pending the trial involving the men, who became known as the ‘Birmingham Six’, but the inquests were never concluded. 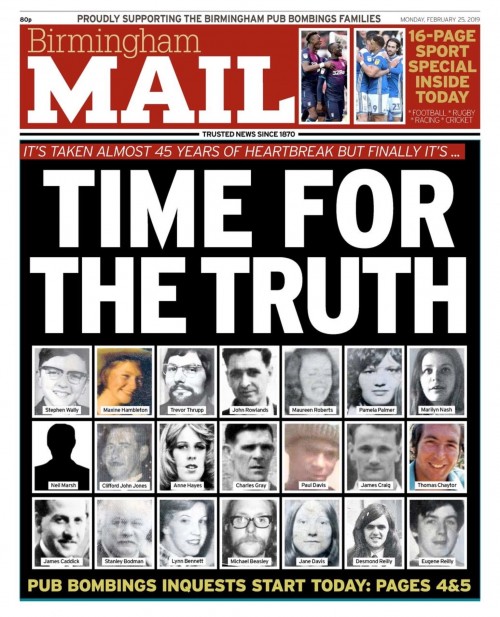 After Andy’s finding the Mail worked with campaign group Justice4the21 to keep up pressure on the authorities – and brought new evidence to bear, including an interview with IRA inteligence chief Keiron Conway, who admitted for the first time that the terror group carried out the bombings.

The Birmingham Mail’s banner headline splash yesterday (25) called for answers as the hearings, which are expected to run for between five and nine weeks, resumed.

Mail print editor Paul Cole said: “We will see this through to the end. The families deserve the answers to their questions about what happened that terrible night.

“It is thanks to the journalistic diligence of Andy Richards that the hearings are being re-opened today, and we aim to be in court every day to cover the inquest.”