Daily urges government to ‘show us the money’ after Powerhouse probe

A regional daily has urged the government to “show us the money” after investigating the impact of the ‘Northern Powerhouse’ project on its patch.

The Northern Echo has marked five years since then-Chancellor George Osborne launched the concept with a special report on how it has affected the North-East of England.

As a result of its investigation, the Darlington-based Echo has called for “proper investment” to be put into the region.

A front page image of the Angel of the North holding uneven weights was used to illustrate the current North-South economic imbalance. 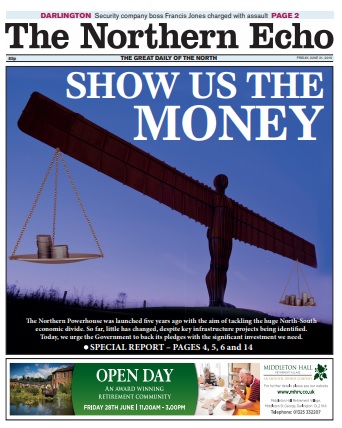 The Manchester Evening News also recently ran a similar splash, depicting its patch behind a wall with London in the distance.

Echo editor Hannah Chapman told HTFP: “When the Northern Powerhouse was first announced we were sceptical about what tangible changes it would bring to the North-East, as the focus seemed very much to be on the North-West.

“We wanted to gather as much opinion and information as possible about what has happened on our patch over the last five years.

“The conclusion is that while the Powerhouse is a great concept, and there have been some welcome changes in terms of elected mayors and devolved powers, it is still a vast way off achieving what George Osborne set out in 2014.

“There needs to be some proper investment put behind the infrastructure plans drawn up for the region, and our front page was designed by our graphic artist Steve Wetton to reflect the huge North-South imbalance that still exists in our economy.”