A regional daily is celebrating a football double after covering a shock Premier League victory and launching what is thought to be a regional press first.

Norwich, who were promoted to the Premier League in May, won a 3-2 thriller on Saturday, prompting the EDP to run the souvenir special – featuring 16 pages of coverage ad a free victory poster.

The win marked a double football celebration for the EDP after it launched the club’s first ever official sticker album on Friday.

Don’t miss your souvenir wrap, plus 16-pages of #NCFC including a poster in tomorrow’s @EDP24. #Proud #HistoryMakers pic.twitter.com/hM7AdxflT2

The newspaper has teamed up with Norwich to produce the album, which can be filled with 230 stickers the club’s best moments, players and managers.

The albums cost £1 and packs of five stickers can be bought for £1 form newsagents across Norfolk.

Editor David Powles told HTFP: “It’s a partnership with the club and to my knowledge the first time a sticker album focusing solely on one team has been produced by regional press.

“A big one for us – and clearly helped by Saturday night.

“We of course ran stacks of stories online over weekend and followed it up with 16-pages of coverage and an EDP souvenir wrap.”

The album is split into sections which include the current first team, Norwich kits through the years, goalkeepers, defenders, midfielders, forwards and managers.

The club’s chief operating officer Ben Kensell told the EDP: “We’re really pleased to launch what is a unique product for this football club.

“We jumped at the chance to partner with Archant on this, and are very excited to get the sticker book out there for the fans. We think it’s a fantastic product, and can’t wait for it to go on sale on Friday.

“So many of us, including myself, grew up with sticker books and collecting and swapping stickers, and it’s still a big part of football culture.

“Whether you’re an adult or a kid, if you’re a Norwich fan then you’ll love this.” 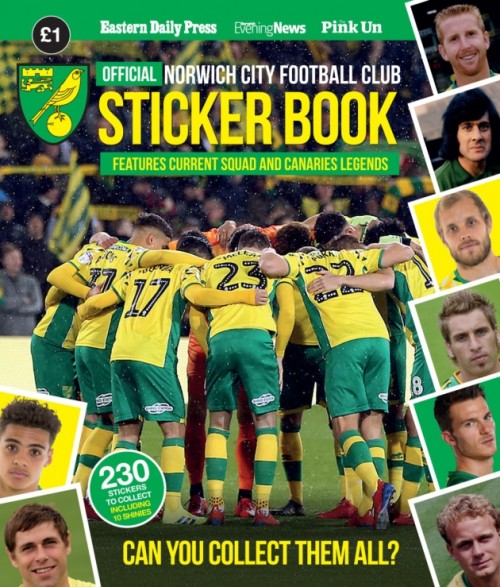