A regional daily has retained its Newspaper of the Year crown at the Midlands Media Awards.

The title was one of three gongs won by Wolverhampton’s Express & Star at the ceremony, which was held on Friday night.

There were also wins for the Express & Star’s Luke Hatfield, who took home Multi-media Journalist of the Year, and Tim Thursfield, who was awarded the Tony Flanagan Photographer of the Year prize. 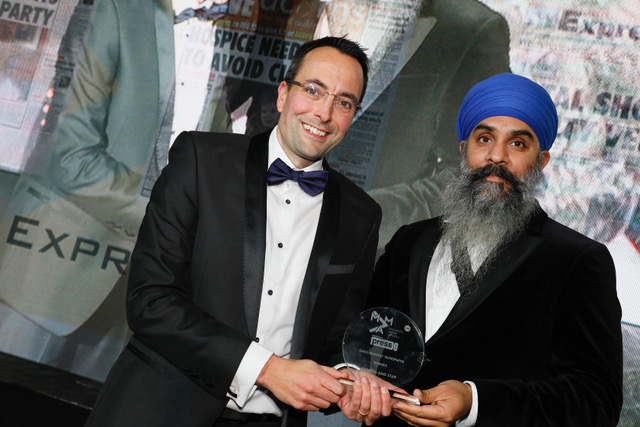 Martin Wright, editor of the Express & Star, receives the Newspaper of the Year (Daily) trophy from headline sponsor Bobby Singh

Zoe Chamberlain, who works for the sister titles, was awarded Daily News Reporter of the Year, while the equivalent honour for journalists on weekly newspapers was won by Bev Holder, of the Stourbridge News.

Of the E&S retaining its title, chairman of the judges Laurie Upshon said: “There’s an awful lot in it – and that’s a great selling point.

“With more than 220 entries, these awards really do reflect the wonderfully diverse region we serve.

“There were excellent submissions from across the region which made the judges’ jobs extremely difficult, but we were
delighted by the quality of work submitted.”

The full list of winners at the awards, hosted by the Birmingham Press Club, is as follows:

Blogger of the Year
Adrian Goldberg, Kick in the Grass/BBC

Magazine of the Year
99 Percent Lifestyle

Supplement of the Year
Oxford Mail

Radio Journalist of the Year
Adrian Goldberg, Kick in the Grass Productions/BBC

Weekly Newspaper of the Year
The Staffordshire Newsletter