The Lancashire Post’s Sponsor a Star campaign aims to help charity Sue Ryder, which is opening a state-of-the-art specialist neurological care centre in Preston in March.

The Post is asking its readers to help raise cash to kit out the centre with things which will help patients with illnesses such as Huntington’s, Multiple Sclerosis, Parkinson’s or Motor Neurone Disease, who can lose access to hobbies and interests because of their conditions.

Suggested items on the centre’s wish list include an anti-gravity treadmill, which could allow someone with limited mobility to experience a form of running again using a hoist, or a bespoke virtual reality headset – which can realistically simulate a 3D underwater scene for someone unable to take part in scuba-diving in real life. 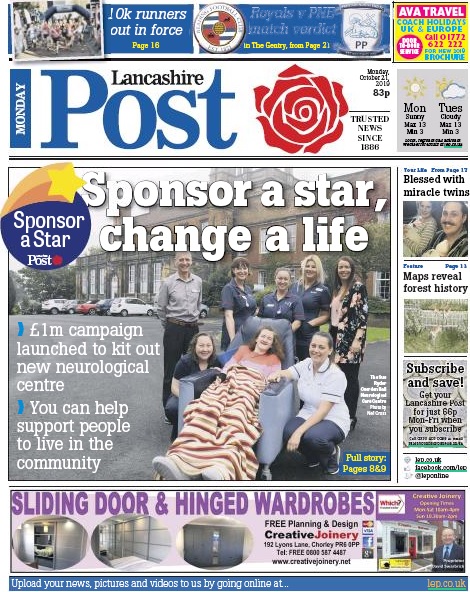 The Post splashed on the campaign’s launch on Monday, and editor Gillian Parkinson told HTFP: “Sue Ryder has had a care home near Preston for many years so is known to people in our local community.

“However, the opening of the charity’s new neurological centre gave us the chance to find out more about its work and to help fund some of the extras needed to provide amazing experiences for people living with degenerative diseases.

“We haven’t set a specific target for what we want to raise, but the centre does have a wish list, so we will do the best we can to supply as much of that as possible.

“The reaction so far has been terrific and our readers have really responded to the quite emotive stories of the people receiving treatment from Sue Ryder.

Added Gillian: “Before Christmas we will list everyone who donates £10 or more towards the appeal in our print and digital products as a way of saying thank you for their support.

“Community appeals like this are a vital part of what we do as a campaigning newspaper and website. It’s what local media is all about.”