Journalists help editor ‘steal’ his own bike back from thieves

A regional daily editor “stole” his own bicycle back from thieves after being advised to do so by police.

Arron Hendy, editor of Brighton daily The Argus, discovered his racing bike chained up outside a shop four days after it had been stolen from a city centre garage, where it had been locked up with another cycle which had also been taken.

Arron called the police to tell them about the discovery, in Brighton’s North Street, but they said were unable to help because they already had 16 “high risk” incidents to deal with at the time.

Instead, he was advised to use bolt cutters to take the bikes back himself. 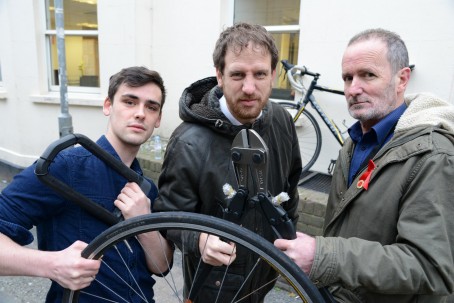 Arron recruited reporter Jody Doherty-Cove to buy a lock in order to chain the bikes back up again and prevent the thieves from taking them away for a second time, while news editor Kim Mayo purchased the bolt cutters to cut the locks used by the thieves.

Said Arron: “I was just walking up North Street and wasn’t looking for my bike but it suddenly caught my eye and I thought ‘that’s my bike’. It’s not really worth a great deal but it’s my bike and I was not going to lose it again. I called the police but they couldn’t help.

“I was concerned that if the thieves came back there could be a difficult situation. The police could not send anybody, but they were very helpful and gave me advice.

“I called Jody as I knew he was nearby and I stayed with the bike while he went to get a new lock for me so that we could secure it while I went to get some bolt cutters. The bolt cutters cost me nearly £50 but I wanted my bike back.

“When we were walking back up North Street to cut it free we saw a few officers dealing with a demonstration and told them what we were doing in case they were concerned about two men walking up the road with a bike and some bolt cutters. Thankfully we freed the bikes and we now have them back.”

Sussex Police confirmed it had received a report about the stolen bikes being found.

A spokesman said: “The member of the public was advised officers could not attend but to call back if there were further issues.

“Calls are assessed on their threat, harm and risk to the member of the public and at that time officers were on higher priority calls.

“The member of the public was advised to call back if he needed assistance should there be a breach of the peace.”