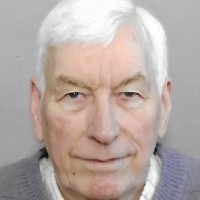 A former regional daily editor who went on to teach journalists in countries freed from dictators has died aged 78 after a 15-month battle with liver cancer.

Tributes have been paid to Norman Carroll, pictured, who edited his hometown paper the Peterborough Evening Telegraph and later weekly title the Melton Times.

After leaving the regional press, Norman worked for the Home Office in China and the Middle East to train reporters in societies where there was a newly-emerging free press.

He later returned to the United Kingdom, working in PR for the Royal Bank of Scotland, before retiring to Cumbria.

Norman, who died at a care home near Melton following a long illness, began his career as a junior reporter on his hometown newspaper after leaving school, before moving into PR with the British Army overseas.

He returned to the UK to take the deputy editor’s job at the Kettering-based Northants Evening Telegraph, later stepping up to edit the paper where he began his career in Peterborough.

Brian Johnson, who worked with him in Kettering, told the Times: “Norman was a lovely man to work with – a very friendly chap and a good boss. The Melton Times went through a lot of changes in the early 1980s as the paper evolved and expanded.

“I have so many great memories of those days. Norman was a real gentleman and the newsroom was always a happy place to work in.”

Norman moved to the Melton Times in the mid-1980s, succeeding Rod Jones, and he worked there until the end of the decade.

Jan Jackson, who was news editor during Norman’s last year in Melton, said: “I didn’t work with Norman for all that long before he moved on but remember him as being a larger than life personality and a true professional.”

Brian was first married to Helena and latterly to Diana, who he spent 20 years with before she passed away.

Two of his sons, Steve and Jonny, both emigrated to Australia, while a third son Nick lives in Redmile, Leicestershire.

Steve told the Times: “Dad was a real newspaper man and right up to his dying day he had The Times delivered and read it from cover to cover.

“He kept quite a lot of copies from his newspaper career including many issues of the Melton Times and Peterborough Evening Telegraph, where he was also editor.”

His funeral is at St Cuthbert’s Church, at Holme St Cuthbert, Cumbria, at 1pm on 3 October.