Columnist, 90, vows to carry on writing after seven decades 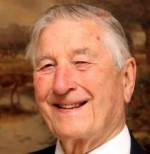 A 90-year-old columnist has vowed to continue writing for a weekly newspaper after seven decades – despite admitting he had considered retiring from his role.

Terry Sutton has worked for the Dover Express since 1949, and pens its weekly ‘Mr Dover’ column.

Terry, pictured, was awarded the MBE for services to journalism in the 1990s and was made a freeman of Dover in 2011.

But, after celebrating his 90th birthday last month, he admitted he had reached a “crossroads” with his career.

Wrote Terry: “After seventy years of writing for the Dover Express, I have reached a crossroads. And it’s nothing to do with Brexit!

“The time has come for me to decide if I should put away my pen, put my feet up and wait for the eventual end! Or should I keep clicking away on my computer in order to compile this weekly Mr Dover column which many readers kindly say they enjoy reading. Some say it’s the work that keeps me going.”

Looking back over his time with the Express, Terry said there had been “so many changes in Dover in those 70 years, and many not for the better”.

He added: “In those days the Dover Express, locally, was top dog when it came to providing the first with the news. There was no television or local radio. No free news sheets and, of course, no social media networks.”

Since publishing the column, Terry has confirmed he will keep writing.

He told HTFP: “I decided to keep going and my column is set to continue to be published this week.”

Editor Luke Jacobs said: “Terry’s association with the Dover Express stretches back decades and he remains a stalwart of the Express as he reaches this milestone age.

“We had no hesitation in keeping him on at 90 years young and look forward to seeing what he writes next.”