A city daily has warned homeless people could die on its patch’s streets this winter after an investigation.

The Glasgow Evening Times ran a week-long series focusing on the issues Glasgow faces around homelessness in the city.

Reporter Niall Christie used Freedom of Information requests and data analysis, as well as gaining testimony by those directly affected, in order to expose flaws in the system and give readers insight into the plight of the city’s homeless population.

The Homelessness Laid Bare series included a warning that there would be “corpses on the streets” unless action was taken, providing a splash for the Evening Times on Thursday, pictured. 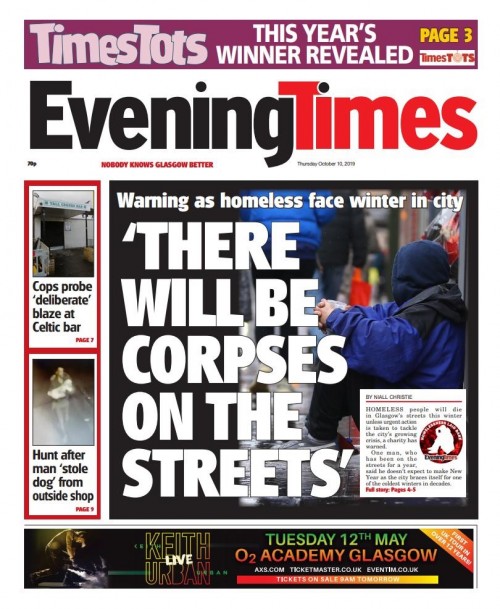 Deputy editor Henry Ainslie told HTFP: “Homelessness is a major problem in Glasgow, and despite ongoing work from authorities and volunteer organisations, there are still significant issues to tackle.

“Our Homelessness Laid Bare series highlighted where the system is letting people down. Mistakes and flaws the consequences of which result in real people forced to sleep on the city’s streets.

“We also highlighted the shocking everyday struggles faced by the city’s homeless – from the horrors of being kicked, punched and urinated on as they sit on the pavement, to the constant battle others face to be housed in often substandard accommodation costing the public purse millions every year.

“This five-part series was a high-quality piece of work by our reporter Niall Christie, which has been well-received by those fighting to improve the situation for Glasgow’s homeless population.”

Henry added: “The Evening Times has a proud history of highlighting the issues that matter to Glasgow and producing journalism that makes a difference, and this series certainly falls into that category.”